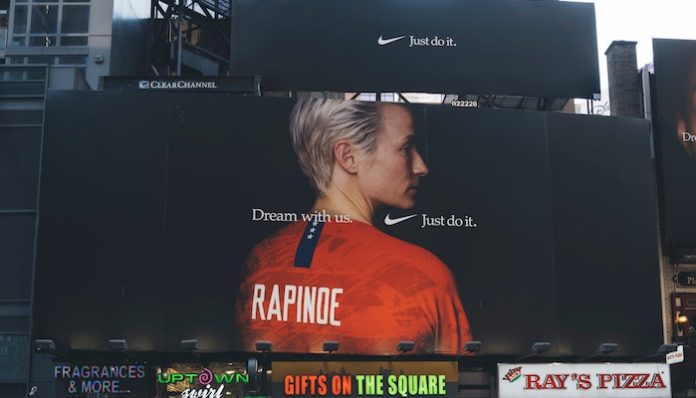 As she raised her arms in celebration after each goal, we heard the shots of Megan Rapinoe’s swagger ’round the world. Her defiant stance challenged gender norms, and she quickly became the “it” meme of the summer. She received the Golden Boot for scoring the most goals in the 2019 FIFA Women’s World Cup and the Golden Ball award.  Rapinoe’s achievements throughout this year’s season are truly undeniable.

However, Rapinoe lights up headlines in other ways, as many deem her un-American or unpatriotic. But why?

For starters, Rapinoe drew the President’s ire by not singing the national anthem and joining Colin Kaepernick’s protest of racism and police brutality. President Trump called her protest inappropriate. He also slammed the soccer star on Twitter for refusing his invite to “the f—ing White House” if her team won. After rescinding the offer, Trump backtracked and criticized Rapinoe.

In addition to refusing the White House invitation, Rapinoe’s allegedly carries a lengthy list of unpatriotic offenses. She celebrates too much on the field, she challenges equal pay, and she pushes for diversity. Essentially, people see Megan Rapinoe as a divisive force.

Rapinoe fired back at her critics during an Independence Day match by saying,  “I think that I’m particularly and uniquely and very deeply American…if we want to talk about the ideals that we stand for, all the songs and the anthem and sort of what we were founded on, I think I’m extremely American.”

Then, here’s Rapinoe: a lesbian woman expressing her opinion without apology. She stands up for causes with the same flair and buoyancy that she uses on the soccer field. She’s simply her voice to do what so many of us are hesitant to do: use our privilege as a platform.

Rapinoe challenges what it means to be an American.

Trump tells Rapinoe to “win before she talks,” but she has won. She was a team member of three World Cup teams and an Olympic gold medal team. Do these judgments imply that a woman’s voice only matters if she’s valuable in some way? I think Rapinoe more than proved herself with this World Cup series as the entire arena chanted, “Equal pay!” Rapinoe didn’t need to “talk;” her fans did it for her.

Does any of that make her unpatriotic? Absolutely not.

Megan Rapinoe honors America by demanding that our greatness include everyone.

What’s more American than that? After all, America was built to be “the land of the free and the home of the brave.”

A Survivor’s Fear: When Your Abuser Is Released  

Why There Is No Such Thing As An Easy Life

4 Practical Ways To Save And Grow Your Money