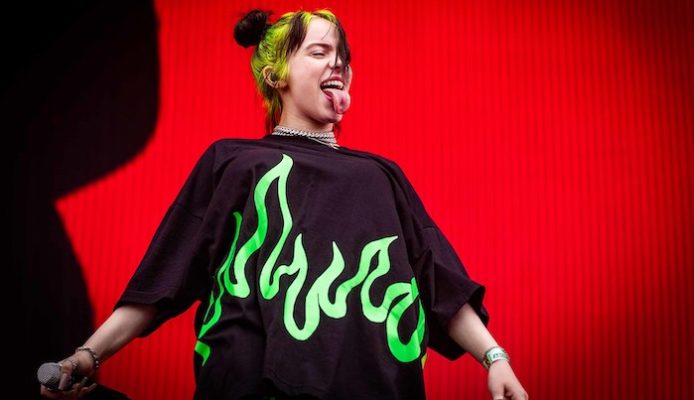 “Who’s playing shows across the globe? Who’s getting free shoes?”

The creative sensation is upgrading to a bigger stage at the Glastonbury Festival. It all happened after her debut album, “When We All Fall Asleep, Where Do We Go?” tore into the top of the charts in over 15 countries upon it’s March 2019 release. This made her the first artist born in the 00’s to reach No.1 and the youngest ever in UK history!

Her rise to fame appears meteoric but has been a slow unfolding of events over the past 4 years. Billie and her older brother, musician and Glee actor, Finneas O’Connell learned from their artistic parents in their LA home. It allowed them to pursue their own interests including dancing, fashion crafting, acting, and music.

In 2015, the 13-year-olds’ dance teacher, knowing their musical proclivities, requested they create something for him to choreograph.

Finneas had already penned a song for his band that he thought would work well to Billie’s voice. They recorded the folksy heartbreak ballad “Ocean Eyes” and uploaded it to SoundCloud for her teacher’s perusal. It wasn’t the first track they’d ever uploaded. This track drew loads of attention. When they went to bed and awoke to discover it was going viral!

From there, the Billie Eilish Family Business was born.

The song was officially released a year later, in November, after Billie was signed by Interscope Records at 14. The siblings set to work in their bedrooms in order to produce an EP, intimidatingly titled, “Don’t Smile at Me”.

Billie’s career started to bloom in 2017 after she recorded music for the soundtrack of Seasons 1 and 2 of the Netflix Series, “13 Reasons Why“.

She appeared on Ellen, took selfies with Julia Roberts and performed to increasingly packed out shows. With downloads, views, likes, and followers steadily increasing across social media platforms and the globe, Billie, alongside her supportive family, worked tirelessly towards the success of her debut. Her parents help out on tour as she continues to co-create with Finneas who also plays on stage with her. However, she maintains strict creative control. From taking 90 attempts to record the first word of “When The Party’s Over” and what horror aesthetics should be utilized in “Bury a Friend” to choosing which silhouette-less, rapper-inspired outfit to don or add to her clothing line.

The melancholic-eyed teen is the embodiment of Gen Z.

A brutal recipe that combines a ton of youthful arrogance, a dash of apathy, lashings of fearless honesty, and a bucket of silly energy contrasted with a side of a sullen disposition. She typifies the flippant morbidness of a generation disillusioned by their inheritance of a chaotic world – a paradoxical youth who simultaneously care too much and not at all.

Many draw parallels to Lana Del Rey’s somber sound or Lorde’s bored delivery, but no comparison has quite encapsulated the raw edginess of Billie Eilish’s hushed, cracked tones overlaid with her home-produced genre-bending sound!

Some have labeled her precocious. Since there are not many young teens invoking the mind of a serial killer or conversing about burying friends and sleeping with their dad… at least not so brazenly! But with half of the mental health problems beginning before the age of 14, it’s no surprise that the youth of today are drawn to her depressingly relatable lyrics.

Billie claims that “young people know more about the country they’re living in than anyone” and she says that “it’s dumb that they’re being ignored”. But Billie isn’t ignoring them. She is them. And she’s giving the rest of us a glimpse into their unique perspective and experience. Which partially explains why she resonates so much with them. Dave Grohl revealed his daughters are huge fans and compared her rocketing stardom to that which he experienced during his Nirvana years and that Billie signifies that Rock is still alive.

Undoubtedly, her die-hard fandom will soon have a name for us to reference them by… Billiots? Billie Eyelashes? Pirates? It’s a base that largely consists of young teen girls who spend the majority of their lives online. But now that radio has caught up with the social media songbird, there’s no doubt that her mature hypnotic beats will expand that demographic exponentially.

She’s on the cusp of becoming a household name, which concerns her. However, this hard-ass doyenne has a choice of words for anyone trying to criticize her success or her beginnings:

“Who’s playing shows across the globe? Who’s getting free shoes…? Me!

Not to be cocky or anything, but fuck you.”

My Toxic Trait Is Negative Self-Talk