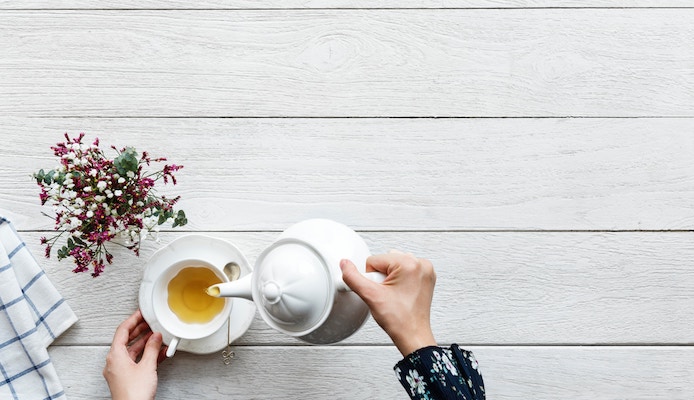 Every day I drink my secret potion, my cup of crack, green tea.

Green tea is considered one of the world’s healthiest drinks and contains one of the highest amounts of antioxidants of any tea.

What is green tea?

Green tea is made from the Camellia sinensis plant. Green tea originated in China, but its production and manufacture has spread to many countries.

Green tea is loaded with antioxidants and nutrients that have powerful effects on the body. Green tea has many  impressive benefits.

Below are 10 health benefits of green tea:

The key active ingredient in green tea is caffeine, which is a stimulant.

2. It Lowers Your Risk Of Cancer

Green tea is loaded with EGCG, Epigallocatechin-3-gallate (is the most abundant catechin in green tea and accounts for 50-75% of its total catechin content.

EGCG blocks enzymes that help to maintain cancer cells in the so-called ‘cell cycle’, which allows them to keep growing. Because of these actions, EGCG forces cancer cells to stop growing, usually permanently.  Not only do EGCG and other green tea antioxidants stop cancer cells from growing – they also actively kill them.

If you look at the label of almost every commercial weight loss and fat burning supplement, chances are that you will find green tea as an ingredient.

Green tea contains caffeine and a type of flavonoid called catechin (which is an antioxidant) both of these compounds can speed up metabolism. Catechin can help to break down excess fat, while both catechin and caffeine can increase the amount of energy the body uses.

Green tea can help with weight loss, but you still need to have a balanced diet and workout regimen to lose weight effectively.

Drinking green tea rapidly improves the health of the delicate cells lining the blood vessels and helps lower one’s risk of heart disease. Green tea, is beneficial for metabolic and cardiovascular health and it prevents many of the risk factors for heart disease, such as having high blood pressure or cholesterol levels, some evidence shows that green tea contains 10 beta-blocking compounds, seven calcium channel blockers and 16 diuretic compounds. It also has more ACE-inhibiting properties than many other plant foods that are commonly consumed, which helps increase the amount of blood your heart pumps and lowers blood pressure.

Caffeine, and green tea’s ability to mobilize fatty acids in fat tissue to make them more easily available for use as energy also seems to aid physical performance. In one study, caffeine was shown to significantly increase physical performance (exercise endurance and exertion). The antioxidants in green tea may also help prevent tissue damage during physical exertion as well.

Being a powerhouse of antioxidants, it is a given that green tea will prevent the damage that free radicals cause to the skin. The anti-inflammatory properties of green tea can help prevent damage to skin from all sorts of harmful environmental stressors.

If you feel so rattled, tired, and exhausted, you might want to take a break and have a cup of green tea. Green tea contains tons of amino acids including all L- Theanine which accounts for its pleasant taste and relaxing effect. Studies reveal that sipping a cup of green tea can help people achieve mental alertness and relaxation similar to meditation. It also stimulates the production dopamine and serotonin which makes you feel physically relaxed and at the same time brightens up your mood.

Even though aging cannot be stopped, it can be slowed down by maintaining an antioxidant-rich diet. Green tea can prevent wrinkles and the signs of aging because the antioxidants in green tea are able to preventing free-radical damage.

Antioxidants promote elasticity in the body and inhibit the degenerative processes occurring in your skin cells. The polyphenols and amino acids in the green tea will help the skin produce collagen and prevent wrinkles. Many skin care products are infused with green tea extract to prevent premature aging.

The antimicrobial properties in green tea are also beneficial for overall dental health. It controls the growth of bacteria in the mouth and prevents bad breath as well. Green tea consumption has been used in medicinal practices to prevent the onset of gingivitis and other gum related diseases.

Drinking green tea can lead to a higher quality life and a reduced risk of dying because green tea drinkers are at a lower risk of cardiovascular disease and various cancers over a given period of time, it makes sense that green tea could help you live longer.

Bottom line: green tea is a delicious, healthy drink that should be part of your daily diet.

Photo by rawpixel on Unsplash

6 Reasons It Is So Difficult To Tell Him How You...