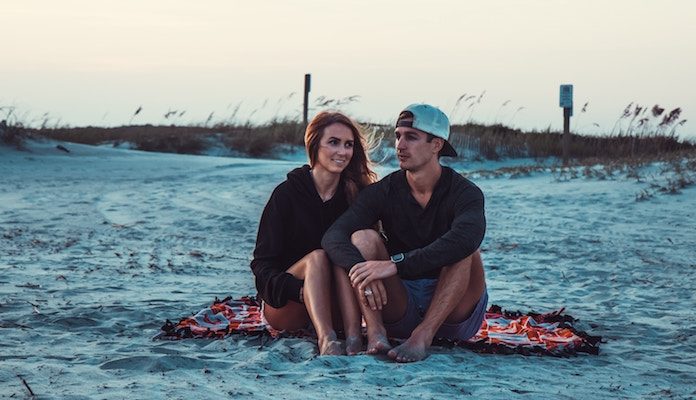 If there’s one thing we know about men, it’s that they tend to be lazy. Let’s be honest, being with a man can be so testing to your patience that you can have a mental breakdown at any moment. It’s also really pathetic that we have to appreciate them doing the bare minimum while we go above and beyond to make their lives, as well as our own, wonderful.

Women also love to laugh at their man and compare him to others when we get together  or in a savage group chat. However, on social media women post these adoring pictures of how thankful they are for their man who does the bare minimum.

An example of doing the bare minimum would say, a man texted you first but never really responds to the conversation afterwards. Or plans a date for you but makes you do everything for the date.

Twitter has had a lot of women continuously praising their boyfriends for doing things that should be a no brainer when in relationships, and it’s relatable AF.

me: “bare minimum twitter is so annoying, you deserve to have higher standards”
also me: “a boy showed me the slightest bit of human decency today so now i’m in love”

Sure, we all sit back and judge other people, but we’re all hypocrites too. The little things do excite us.

He carried my luggage up the stairs cause there were no elevators. #BareMinimumTwitter pic.twitter.com/h8hZB1APR1

This is just common sense. But truthfully, most men these days don’t know that this is an act of kindness and is polite. They don’t even think to do it. Are you going to just focus on your own stuff and leave your woman to carry her bag which is probably heavier than yours because it has everyone else’s stuff in it?

Newsflash: they’re not finding a man. They’re finding a child whose still learning to walk and talk properly.

I’m sorry, but this isn’t a target for men. ALL PEOPLE should hold the door open for others, it’s called being polite and a good citizen. Gender doesn’t have a damn thing to do about it.

bare minimum twitter: i don’t tell my gf/bf what to do or go through their phone. they can go to a party if they want! a relationship is not a prison

It’s so true though…

i’m sorry did this guy just propose over text message in a car with a pandora ring,,,, bare minimum twitter is really at it again https://t.co/RUVmcxYfiH

Okay, I get that cost isn’t important in an engagement ring or the way someone proposes because it speaks to the individuality of the relationship. But proposing through a text message? Really? You couldn’t have done that in person?

Fuck that get me wings and cheese fries https://t.co/OdYWOiCrMD

Yes, it’s true. We do have to appreciate the small things. But women take these small gestures and blow them out of proportion because those are the only gestures they are used to experiencing. Men should be doing things like holding the door open or taking initiative more often. It’s so horrible that women have to praise them for doing things they should automatically do just to be considered a good person.

Ladies, get yourself a decent human. Don’t settle for a man who treats you decently on the rare occasion while you give him your all. If he’s a decent human first, he’ll be an even better boyfriend who will do so much more than you expected or anticipated.

Photo by Cody Black on Unsplash