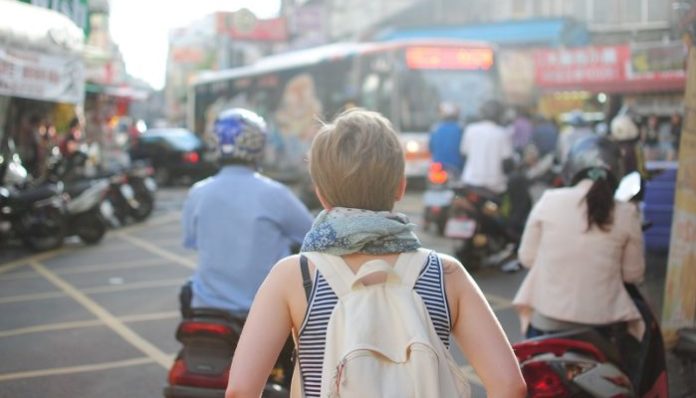 Summer may be over. However, that doesn’t mean your love of traveling is! Traveling is one of the most exciting things you can do any time of year, and for this reason and many others, more and more students are choosing to spend semesters abroad. It’s an amazing experience, but it can be annoying to the locals. If you live in a famous tourist city, you know how strange it is when someone shows up just to visit. Some of them are pros and blend right in, but others stick out like a sore thumb.

If you want to avoid being a thumb, follow these tips and try to be prepared for the event. Running with the local crowd gets you into all the coolest places anyway!

The easiest way to stand out anywhere is to speak differently, so try to talk to the locals. It doesn’t have to be perfect, but any attempt to speak the language tends to endear you to others. It shows respect for the people who live there and a willingness to step outside of your comfort zone.

It also helps make you more capable. You’ll do better in a new area if you can communicate with others, even if it’s just basic language.

Pick up Some Customs

Interactions with locals become much easier when you understand the customs they follow. For instance, many places view time differently. Some places are more laid-back. Customer service may be slow and relaxed if that’s the case. Other places might have more strict customs.

It can also save you money. Haggling is commonplace in many areas, although it might be a bit uncomfortable at first. Customs that you wouldn’t think of, like eating habits, politely pointing and the hand you use to eat with all vary based on the country you visit. Do some research, and learn how to say “sorry” if you mess up!

Most tourist traps are popular for a reason, so you don’t have to skip them altogether. Instead, try to see them in a way the locals might. Go during the off-season or try and hit them up when they first open or near closing time. Or, ask the locals about their favorite spots.

If you’re uncomfortable actually asking, then look up reviews online. Checking the local city guides will help give you new ideas about where to eat from the people who live there — and they always know the best spots in town!

Fake It ‘Til You Make It

If you don’t know where in the world you are or what you’re doing, you won’t get any more lost by getting some food and sitting down to eat. That’s almost always a perfect cover to avoid the “whoops, where am I?” Even if you have one (or ten) of those moments, you don’t have to let anyone know that.

Westerners are well-known for being loud. While that doesn’t apply to everyone on an individual basis, it’s still a good idea to try to keep your voice low. Especially when you’re speaking in a different language, your voice will attract attention. This is often a signal for thieves, who are more likely to try and take advantage of a visitor who might be easy pickings.

Additionally, it can be easy to slip into discourtesy when you don’t speak the local language. Don’t loudly talk about the people around you, regardless of their understanding. Even if they can’t discern the words, most people will pick up on what you’re saying. More than half of communication comes from our body language. They’ll be able to tell if you’re being rude or not — so don’t be.

There’s nothing less fun than needing proper clothing and not having it. While over-packing isn’t the answer, it’s smart to keep track of what the weather will be like wherever you’re going. Many places have a wide variety of temperatures. The desert might be burning hot during the day, but it can drop to below freezing in very little time.

Other parts of the world experience other kinds of weather extremes. Monsoons, droughts, storms and temperature changes all play a big part in how you should dress. Make sure you always take a good, long look at the weather forecast, as well as investigate what the average climate is like. Just because the actual temperature looks comfortable doesn’t mean you won’t have to contend with things like extreme humidity or dryness.

There are usually a few things that give a tourist away, and they include being fixed to a map and taking pictures of everything. The best way to look like you aren’t a tourist is to have a plan. With cell phones, you probably don’t need an actual map or even a camera anymore. But stopping and standing in the middle of the sidewalk to figure out where to go is still a dead giveaway! Know what to do ahead of time if you get lost. Even better, know where you’re going before you leave the hotel!

Being a tourist isn’t a bad thing. You don’t have to hide it, but you will have a better experience if you try to travel like the locals do. Just doing a few small things like learning the language and the customs can make your trip a joy instead of frustration. Make an effort, and you’ll be glad you did!