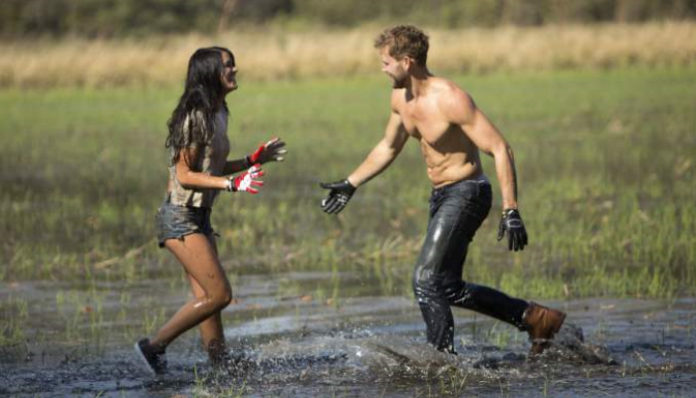 It seems that this season, what is usual for a typical season, is unusual for this season. Actually sticking it out through the rose ceremony is almost unheard of this season, as Nick seems to do whatever the hell he wants and sends women home like he’s sending them to the grocery store. Shockingly, four girls are still going to hometowns this season, and those girls are Raven, Rachel, Corinne, and Vanessa.

Raven says she thinks that this is the week that she tells Nick that she’s falling in love with him… but didn’t she just tell him that like two weeks ago? I’m pretty sure I’m right. Anyway, Raven’s hometown date includes a lot of hoodrat country shit that really brings me back to my glory days of living in backwater Wisconsin. They four-wheel, get busted by Raven’s cop brother for scaling grain bins and catch E. coli (I presume) in some watery swamp somewhere. How romantic.

When we meet Raven’s parents, things are emotional right away as her mom announces that Raven’s dad is now officially cancer-free. How sweet!

Verdict: Raven’s dad tells Nick that he didn’t expect to like him, but he does and is happy that Nick makes Raven happy. He notes that this is the most serious relationship that he’s seen Raven had, and promptly gives Nick his blessing.

Rachel’s hometown started out with bringing Nick to church with a lot of gospel. Not my ideal date, but it’s important to Rachel, so it’s good for her. For some reason, Rachel feels that it’s important that she has the race talk with Nick. The situation awkwardly forces Nick to say, “I know you’re black. I see that ” then go on to explain to her that that’s not what matters to him. Maybe it’s because I am a white woman, but I don’t understand why Rachel and her family are making the race a bigger issue than it needs to be. Nick seems comfortable and like he honestly cares about Rachel… why should race matter here? It really ground my gears when Rachel’s mom asks Nick, “Have you dated a black woman before?” Explain the relevance to me, please. This hometown was just hard for me to watch for the very reason that race seemed to be the only thing this family talked about.

Verdict: While Rachel’s dad is absent due to some work conflicts, her mom and sister weigh in on the situation. After interrogating Nick about his opinion on the racial barrier (something that Nick rightfully thinks isn’t an issue), all seem to give their blessing. Nick is 2 for 2 thus far.

We kick this one off with Corinne taking Nick shopping at “one of the most exclusive malls in Miami.” Anyone who has ever dated a guy can tell you that this is probably Nick’s idea of hell. So this segment is mostly Corinne shopping til she drops, and Nick standing idly in the background. Nick got sassy with the shopping and it’s my favorite part of this entire episode, and when came out in the deep V-neck, I almost died. Not to mention, catching a glimpse of his boxer briefs in the dressing room (ooh, la la). Corinne tells him she loves him and it’s almost super sweet like I felt happy for her even though she is the spawn of Satan. Her family is almost as dysfunctional as her and it’s even more uncomfortable to watch than Rachel’s hometown.

Verdict: Corinne’s father is reluctant to give his blessing. It seems her mom doesn’t really give a f*ck either way, but the real one to impress here is Raquel, who also seems hesitant to give Nick the go ahead.

For this hometown, we’re meeting Vanessa’s students. The students are French and English, and all over the age of 21 as they are special needs adults. THIS IS THE SWEETEST HOMETOWN EVER. Her students missed her so much, and it was so sweet to watch them cry as they welcomed her back and told her they love her. JUST PICK VANESSA RIGHT NOW. JUST DO IT.

Verdict: Vanessa’s students give the a-okay, which makes me very happy. As for Vanessa’s family, there’s no hard “no’s,” but they also aren’t jumping all over Nick to welcome him to the family. Daddy Dearest tells him that he can’t give him his blessing while he’s still dating three other women. Fair enough. Your move, Nick.

My Predictions For The Rest Of The Season

I predict that Nick will be kicking Rachel to the curb at the next rose ceremony. Raven, Vanessa, and Corinne will make it to the Fantasy Suite. And because I believe everything I read online (*cough* a certain article about Nick knocking a contestant up *cough*), I speculate that he knocks Corinne up. Raven and Vanessa will glide their way into the final two, and finally, I predict that Vanessa will reign victorious. Only a few more weeks left! Huzzah!

Feature image via screengrab of The Bachelor