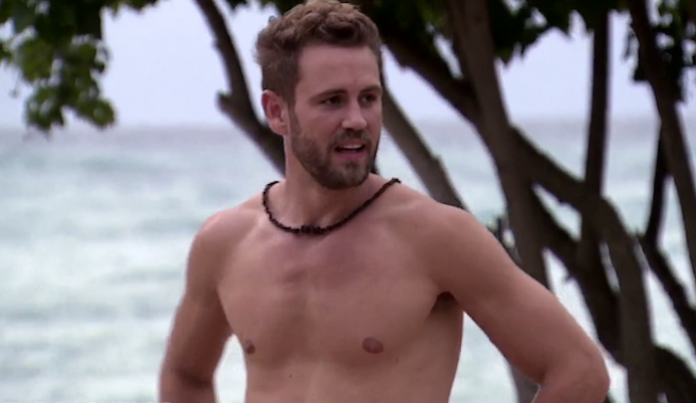 When we last left the girls, we left Taylor in the swampy bayou of New Orleans while Corinne was being wine-and-dined by Prince Charming. Taylor was sent home on a two on one, which led to Taylor pouting on the shore as Corinne and Nick sped away on a boat, followed by Taylor’s (what we assume) sacrifice to the voodoo gods. Though most episodes throw me back to the high school days when this drama was regular shit, this episode particularly struck a high school drama chord with me.

1. Taylor had a tantrum about going home

For whatever reason, Taylor didn’t think it was good enough to leave without lighting a fire in her wake, so she showed up to Corinne’s date with Nick. Nick seemed like he was done with the conversation, and while they’re away, Corinne pouts at the table and mocks Taylor to the producers. I’m not sure what Taylor was aiming to achieve there, because her ass is still in the limo on her way home and Corinne is still getting white-girl wasted on wine and sucking face with Nick. Don’t let the door hit you on the way out, Tay Tay.

2. Nick cancelled the cocktail party before the rose ceremony

Chris Harrison announced that the cocktail party was cancelled, and the girls go into panic mode. One by one they tell the camera how they didn’t get a chance to tell Nick how they really felt and that they aren’t ready to go home. My question is this: “Da fuq?!” You’ve known this guy for like two weeks and you’ve maybe had like two conversations with him. No, Disney Princess, you don’t “love” him.

3. Jasmine cried when she didn’t get the one-on-one

The first one-on-one in St. Thomas went to Kristina, which left Jasmine on the beach crying to Danielle about not being asked on the one-on-one. This isn’t the prom, Jasmine. You didn’t just get stood up. Staaahhhppp.

Kristina’s backstory is revealed on her one-on-one with Nick, where we find out that she grew up in Russia in an abusive household. After being sent to an orphanage, she was given the choice to stay in Russia, or go to America, the land of opportunity. She ultimately made the courageous decision to leave her family behind and go to America (obviously, since we’re here), and watching her open up to Nick and Nick being completely in awe of her is like watching that one couple who found their soulmates in high school.

The girls are all pitted against each other in a beach volleyball game. Good fun, right?  Except Corinne gets drunk, Nick seems to only give a fuck about what Corinne is doing, Jasmine is losing her fucking mind, and Rachel quits the volleyball game. Then they all retire to their own parts of the beach to cry about it. Nick’s worried that the date was a complete waste of a day because he doesn’t feel like it brought him closer to any of the women.

Nick doesn’t pay any attention to Jasmine and it pushes her almost over the edge. She declares that any guy would be happy to have her, how much she wants to punch Nick in the face, and that she’s been to St. Thomas before and that she doesn’t need to be there…er, a little excessive. Shit got crazy when she told him not once or twice, but three times that she wanted to choke him and Nick looks scared shitless. Bye, Jasmine.

This date is reminiscent of the beginning of John Tucker Must Die when he’s bouncing back and forth between women on his date. Watching Nick with Whitney like watching a couple of freshmen under the bleachers not knowing what to do. He dumps her and then she makes it about Danielle when it’s not about her at all. Instead of accepting defeat, she drags Danielle through the mud. Woof. As for Danielle, the conversation is painful to watch as Nick remains quiet and you can tell he’s trying to feel a connection that just isn’t there. Bye, Danielle.

8. Nick’s emotional conversation with the girls

Nick could barely keep it together when explaining to the girls what happened on the two-on-one. He expressed his concerns that love may be something that might not actually happen for him. He cried, they cried, we cried (did we??). It was an all around cry fest. It was like when someone got dumped by their boyfriend and the squad came together to cry and comfort.

Shit’s going down next week when Corinne tries to seduce Nick, Nick becomes distant from the girls, and everyone is wondering if he’s going to call it quits or if the game is still on. Oofda. Damn, we’re only like halfway through this season. *chugs bottle of wine*

Feature image via screengrab of the Bachelor