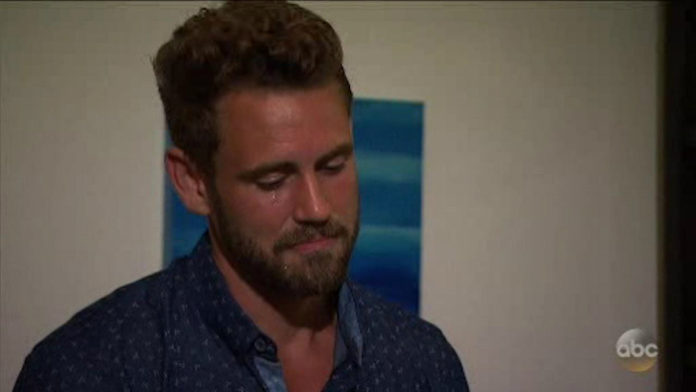 Last week, we left off with Nick storming the girls’ place in St. Thomas after sending Jasmine, Danielle, AND Whitney home (the second time a Bachelor has sent home both girls on a two-on-one since Chris sent home Ashley I. and Kelsey a few seasons back). He was in tears as he confessed to the girls that he didn’t know if this was something that would work out for him, and after watching him have painfully awkward conversations with almost every single girl, I’m left thinking, “Rip off the goddamn band-aid already and let’s end this.” This week was no exception, and there was no shortage of moments I was left thinking that this season should just end already.

Nick momentarily had all of America convinced that he was going to bail on this season (and I was ecstatic), but Chris had him convinced otherwise. Instead, Nick decides to cancel the cocktail party and the rose ceremony, skip town, and head to Bimini (yeah, I have no f*cking clue, either).

Seriously, this bitch needs to go. She expected a one-on-one, as she’s the only one left who hasn’t had a one-on-one, and that somehow makes her deserving of one. Instead, Vanessa gets it (the card says, “let’s go deeper…” – uh, that is what she said). Also, Corinne is bloated. She makes a big deal about this.

As Vanessa was on her date, Corinne talked mad shit to Rachel about Vanessa, mocking her occupation and family. She also claimed that Vanessa has no depth to her, and I just want there to be a catfight to end all catfights and get this shit over with.

Can we talk about how the boat looks like it’s badly photoshopped into the tropical background? This is the most boring date ever. They’re laying on a boat and talking about last week’s episode and it’s all shit we already know. Vanessa says she’s not going anywhere. That’s what you think, bitch. “We’re underwater and kissing and our bodies are pressing together and all I can feel is love.” That’s not love. It’s probably a dick. Nick’s dick is probably all up on you. I shouldn’t be so mean. I actually like Vanessa.

We’re officially to the part of the season where everyone awkwardly calls Nick their boyfriend, and yet, all of the girls have become frenemies. They’re friends, but they hate each other’s guts. Supes awkward when Nick is lathering Kristina up with sunscreen (and goes dangerously close to her no-no square) as Corinne and Raven watch on. These dates just keep getting more and more awkward. Most of this date has been shitty small talk. This show has quickly turned into Jaws as the producers thought it would be hilarious to make them swim with sharks. Like without a cage.

There’s still one more Danielle left, and this week she got a one-on-one. Despite the fact that she has literally no personality, she’s managed to make it this far. There’s no conversation happening, and they’re having a really hard time making that happen naturally. She can’t tell, but I’m pretty sure he just friend-zoned the shit out of her. Yep, bye, Danielle! That’s all I’m gonna say on this matter. Next!

Corinne needs to “take matters into her own hands,” and decides to spring herself and her hoo-ha on Nick in his hotel room. “My heart is gold, but my vagine is platinum.” OKAY, Corinne. The doors have been closed, and we are stuck watching images of the closed door as we hear audio of them doing some sexy time. Nick says it isn’t a good idea, and then rejects Corinne. Finally, Nick has learned from his past mistakes. It seems every “great” idea Corinne has, backfires on her, and then she spends the next two days crying about it.

Rachel’s date goes well, and it sends Corinne into almost a full-blown panic attack. Nick is once again with Chris, and no one knows what the f*ck is going on. He’s convinced to not have the rose ceremony and “give her the respect she needs to send her home in private,” and I’m pretty sure it’s Rachel. NO, NO, NO IT’S KRISTINA. WHY, NICK, WHY!

Websites flocked to report early yesterday that history has been made with the next season of the Bachelorette, with Rachel being the show’s first black Bachelorette. However, considering Kristina went home last night, I still have hope that it could be Kristina. History can still be made with Kristina since she is Russian and from Mother Russia. After all, it’s not completely uncommon for ABC to do a last minute switcheroo (TBT to Caila and JoJo).

No one really knows what the f*ck is going on tonight. No one ever knows what is going on with this guy and this season. I honestly can’t see any of these relationships going anywhere in the long run. Anyway, here’s to almost being done with this season!

Feature image via screengrab of the Bachelor