Look. I’m all for graphic T-shirts. I have a lovely “coffee straight up”, “knock out” and “flawless” T-shirts. Things I’m not a fan of? Oh I don’t’ know, T-shirts that promote rape culture. Having T-shirts that promote rape culture being a topic that we have to discuss is disgusting in and of itself, let alone having a company that ACTUALLY promotes a T-shirt that says this: 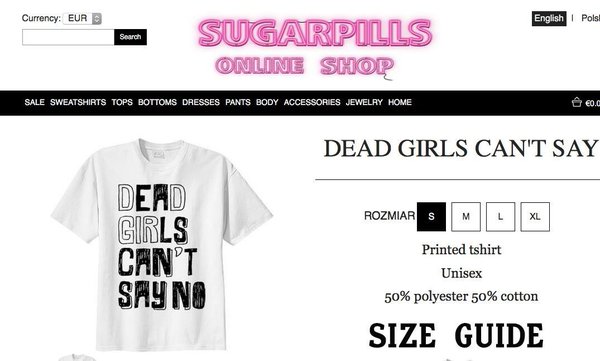 Yeah, you read that right. Sugarpills, an online clothing company based out of Poland, and Dolls Kill, an American online retailer that stocks the brand, is seriously is selling this shit. The kicker? IT’S $55. HA. OK.

The girl that tweeted this is also accusing SugarPills for stealing her designs (not the “dead girls can’t say no shirt”, for the record), but this shirt for example:

So not only is this company stealing people’s work, but also letting everyone know that dead girls can’t say no.

Sugarpills responded to Mic‘s request for comment, saying via email:

“When we saw this all ‘promoting rape culture’ thing we were all like “WHAT?” We will never ever promoting such a bad thing like rape. We had this tee at our website but tee was out of stock anyway, when we started a clothing company we had this tee in our regular sale, but I would never meant to promote rape…it was the first time when someone accused us of promoting rape by this tshirt or whatever other design. Our website and social media are all like pastel pink and here is to answer yourself a question, is this matching our aesthetics? No, it doesn’t.”

Excuse me while I humble you here for a second, SugarPills. First off, why the HELL would we look at your website aesthetics when trying to figure out if your company is promoting rape? “Well their website is like pink, they can’t promote rape!!” That is like stating “he was dressed so nice, there’s no way he would rape a girl!!” *Spoiler alert* rape and rape culture come in all different types of colors, including pastel pink. Secondly, how would you think any human being would read your “dead girls can’t say no” shirt?

Rape culture is a real thing, did you, like, not understand that? Because I’m pretty sure rape culture is all over the world, including Poland. *shocker* Thirdly, you sell this shit for $55 for a T-shirt that promotes rape (of dead girls too, which in itself is super weird and illegal might I add), that’s probably made out of a cheap-ass cotton shirt you can buy at Walmart for $7. So, let me speak for the human population here when I say SugarPills, you’re tacky and I hate you. So why don’t you do us all a favor here and just go.