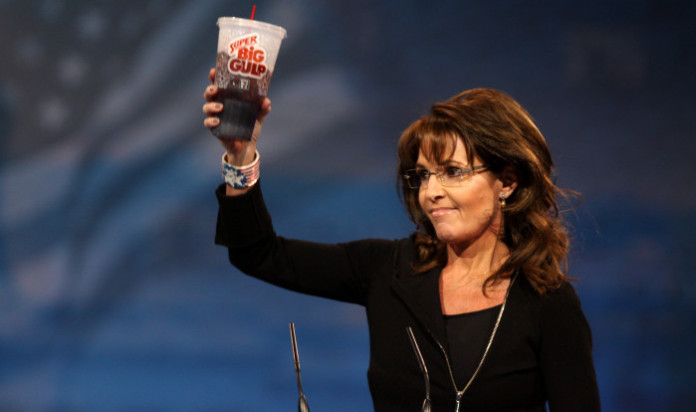 Former Vice Presidential hopeful and geography wiz Sarah Palin threw herself back into the spotlight this week by endorsing Donald Trump. Just two weeks before the February 1st caucus, Palin appeared at a Trump rally in Iowa, saying she was proud to endorse “the leader that will make America great again.” Don’t hold your breath, girl.

But Palin didn’t stop there. Rather, she followed Trump to his next rally in Oklahoma on Wednesday and decided to address “the elephant in the room,” her son’s arrest for domestic violence against his partner. Monday night, the day before Palin’s endorsement, Track Palin was arrested for committing domestic violence on a female, interfering with her ability to report that assault and for possessing a weapon while intoxicated.

Instead of admitting her son could ever be responsible for his own heinous actions, Palin used her favorite scapegoat to wash away Track’s guilt: President Obama.

Nope, you didn’t read that wrong. Palin asserts Obama’s ineptitude led to her son’s actions, saying, “My son, like so many other [veterans]…they come back a bit different. They come back hardened. They come back wondering if there is that respect for what it is that their fellow soldiers and airman and every other member of the military so sacrificially have given to this country.”

“And that starts at the top.”

Palin’s argument rests on the idea that the President doesn’t know, appreciate, or empathize with the struggle of our nation’s military, and that if Track were better supported, he would not have behaved so disgracefully.

It’s no secret that our country could do more to take care of our veterans, who put their lives on the line for our safety and security. Perhaps, as Palin asserts, Track is suffering from PTSD and should seek treatment, but that does not give him a free pass to be abusive.

The President cannot make Track’s decisions for him, and no broken system can excuse his being violent toward a partner. Domestic violence, to me, is one of the grossest breaches of trust that can exist in a relationship. The National Coalition Against Domestic Violence says that nearly 20 people per minute are physically abused by an intimate partner in the United States, which adds up to over 20 million men and women every year. The decision to abuse a partner is a huge national problem, one that offenders must take responsibility for, regardless of their mental or physical state.

Palin is the mother on the playground who says her son didn’t mean to fight, but another child made him do it. Schoolyard wisdom still holds true: no one can make you do anything. Before jumping back into the spotlight and shoving some more Donald Trump down our throats, Palin should take look at herself and her son and wonder when she will stop making excuses.

Why I Choose Not To Define My Sexuality And Neither Should...