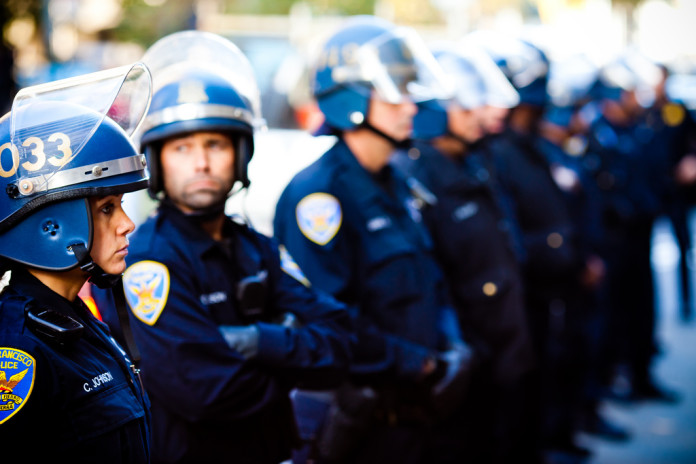 In recent events, such as the death of both Michael Brown and Eric Garner, the world has become distinctly black or white. In both events, the police officers on scene were to blame according to the media, and riots started all across the country…and they haven’t really stopped. Protesters have been chanting, “Black lives matter,” “I can’t breathe,” “No justice, no peace,” and “Hands up, don’t shoot,” throughout the streets in major cities. People are being pressured into picking a side, black or white. But who’s standing up for the blue lives?

This Thin Blue Line represents all law enforcement, who protect this nation daily. The black background is a constant reminder of all the fallen officers. The line is what police protect, the barrier between anarchy and a civilized society, between order and chaos, between respect for decency and lawlessness.

It’s completely heartbreaking to realize we are still a society that sees color first. All lives matter, even the lives of people we don’t like. Police lives matter. Like them or not, police are the demarcation line between good and bad. They are the reason why the movies, The Purge and The Purge: Anarchy, are just that, movies.

Without them, chaos would wreak havoc in our cities and neighborhoods. Society has such a fixed view on police officers that they refuse to think of officers as people who have families too. As a young female who will be starting a career as a police officer very soon, then I can tell you that if I’m ever put in a situation where it’s either them, or me, it will always be me who is going home to my family.

I interviewed a few brave police officers, and a lot of what they were saying stuck with me, and hopefully you’ll feel the same way.

(All respondents wish to remain anonymous.)

“My career goal is to change the relationship between society and law enforcement. I’ve been able to make people laugh during a traffic stop or laugh while in cuffs. It sounds crazy, but I had one guy tell me I was the nicest cop he’d been arrested by. I take pride in changing perceptions, one person at a time. The sad part is, is that one ‘bad’ cop can ruin it for us all.”

“Police work is very dangerous. You prepare your whole career for the one person that wants to kill you. 98% of police officers go their entire career without firing their gun at anybody, but we all train and workout for the slight chance that we are a part of the 2% and have to fight for our lives or for yours.”

“I didn’t sign up for this job to die. I signed up to take the bad guys off the streets. If they chose to not go and fight me, I will always win.”

“Putting on a bullet proof vest is something that my girlfriend still can’t watch me do, because I sure as hell don’t wear it as a fashion statement. I wear it to make a statement that I may have to make today my last day. That I may not come home. That I may lose everything that I love and cherish.”

“They may hate us and think bad of us, but we will still always show up whenever they need help.”

“Police work is just like any other line of working, meaning that everyone is different. I’m sure that there are good and bad cashiers at McDonald’s, I’m willing to bet that the investors on Wall St. aren’t all straight forward and truthful, however, there are wonderful people who work on Wall St. as well.”

“I am just like the person who is reading this. I feel that it is wrong to hate someone because of their line of work.”

“I understand everybody has their right to protest but doing it peacefully, will gain you respect. Destroying towns, will not gain you respect, and is not the appropriate way to accomplish anything.”

“We have families and friends and lives outside of work too. Police work is what we do, and it affects our whole lives, but when we take that uniform off, we’re mothers, fathers, brothers, sisters, daughters, and sons just like everybody else. You may hate us and wish us dead, but just like you, at the end of the day we just want to get home to our families and loved ones.”

Just because you don’t agree with the laws police have to enforce, doesn’t mean you need to revolt against them, nor does it make it right to murder them. The killing of police officers is not only the destruction of life but also an attack on democracy itself.

Police have so much more than their life on the line. Whether you are for or against them, they will still put on that uniform every day to protect you and your family. When everyone runs away from the bullets, they run towards them. If you can’t stand with them, stand behind them. Stand behind the Thin Blue Line.

Being a police officer, or just simply wearing a uniform shouldn’t make you a target. But sadly, it does. If things are going to change, then it needs to start with the understanding that we’re all humans and we should give each other the respect that we want ourselves.

Next time you see an officer, a simple “thank you” can go a long way. We all have jobs where someone can say one nice thing to you and can change your entire day. Pay it forward to those who pay for our protection everyday with their lives constantly on the line.

Thank you to all the brave men and women who allow me to see my family at the end of the night.

What This Year Has In Store For You, Based On Your...

Here’s An Open Letter To The One I Used To Call...