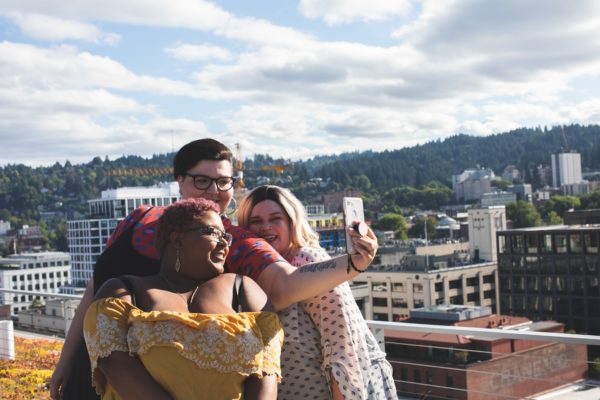 I’m really sick of hearing people saying things like, “If so-and-so knew what she was doing to her health, she would just stop eating and start exercising,” or, “Why can’t so-and-so stop eating?,” or even, “So-and-so is setting such a bad example for her children!”

Let’s set the record straight about fat women — because body shaming people who are overweight or obese doesn’t help anyone.

This is especially important considering that the link between Body Mass Index (BMI) and health is unclear at best. In fact, BMI measurements were never intended to be used by doctors the way it is today.

“The person who dreamed up the BMI said explicitly that it could not and should not be used to indicate the level of fatness in an individual,” writes Keith Devlin, Director of the Stanford Mathematics Outreach Project in the Graduate School of Education.

“The BMI was introduced in the early 19th century by a Belgian named Lambert Adolphe Jacques Quetelet. He was a mathematician, not a physician. He produced the formula to give a quick and easy way to measure the degree of obesity of the general population to assist the government in allocating resources. In other words, it is a 200-year-old hack.”

Even if you’re not convinced that BMI is a poor measurement, plenty of other myths about obesity and fat women that are worth considering.

Myth #1: Fat women should be educated on how to eat better.

Not true. In fact, because popular society is constantly reinforcing that being a woman of size is undesirable, many women of size have a Ph.D.-worth of knowledge of food, calorie intake, and exercise. When you are an obese woman, you are reminded of it constantly.

Your doctors (and others who like to act like they are) tell you that any ailment will be solved with exercise and proper diet, and sometimes people yell shitty things at you in the street. Friends often try to be “helpful” by giving you pointers on diets.

Trust me, a woman who has been dealing with obesity knows more than her doctor does about nutrition, so having information and knowledge about calories, carbs, fat, etc. isn’t what she needs more of.

Myth #2: Fat women should just get to the gym and exercise.

This is totally ridiculous. First off, there is such a thing as being fit and fat.

The Health at Every Size movement aims to remind us that it’s okay to stop focusing on weight loss and let yourself be healthy first and foremost. Many women of size are fit and do exercise often.

Why don’t you see many fat people at the gym or out jogging? Gee, I don’t know, maybe some people don’t like being fat-shamed, made fun of, stared at, or condescended to.

Saying things like, “Hey buddy! Good job! You’re doing great!” or even “You go, girl!” are not helpful.

This is disgusting. I take a lot of issue with any woman no matter what her size being called promiscuous or anything like that.

I can’t even go into why this misperception makes me so angry. A woman of size won’t just take any scraps she can get just because of her size. Why does that idea persist? I don’t know. But I want to go on record saying that a woman of size has as much discretion and intelligence as a skinny woman.

There are no statistics available that prove obese women are more promiscuous than smaller women.

Myth #4: Fat women are setting terrible examples for their children.

Being self-hating, self-berating, and self-critical is setting a poor example for your children, and a mother doesn’t have to be overweight to do that. Making an effort to love yourself and love your children exactly how they are — regardless of body shape or size — is a great example to set.

When you love yourself, you take care of yourself. Taking care of yourself doesn’t mean being skinny, it means eating lots of healthy food often and less healthy food in moderation, exercising in ways that work for your body, and being kind to yourself both physically and psychologically.

You can’t judge how healthy someone is by looking at them or weighing them. Blood tests, energy levels and quality of life is a better indicator or health.

One study found that “elevations in metabolic risk factors are much more strongly associated with mortality risk than obesity.That is to say, regardless of your weight, those blood tests and other objective measures of health are much more telling about your risk of death than your BMI.

So, yes, you can be obese and healthy!

Myth #6: People are fat because they all have binge eating disorder.

This is just not true.

Myth #7: Fat women have no willpower.

I’d venture to say that the opposite it true.

As I said above, many women of size have been on multiple diets and willed themselves down over and over and over again. But as we know, restrictive diets don’t work in the long term.

In fact one of the prevalent myths about fat women is that they would be healthier if they only lost weight. In truth, it’s hard to keep weight off using starvation diets or extreme exercise, and yo-yo dieting often results.

Lots of women have low self-esteem and body image problems — not because they are fat, but because we are constantly bombarded by a media that tells us we are not good enough.

Self-esteem is an inside job. It’s a practice of letting go of beliefs about yourself that the outside world has given you that tells you it’s not okay to be you. You don’t need to let go of weight to let go of beliefs that affect your confidence.

No one should go on a diet — ever. Most people who go on diets will gain the weight back. In fact, many people who start out at a lower weight go on diets which then trigger eating disorders and weight gain.

As researchers studying weight cycling and yo-yo dieting found, “One- to two-thirds of weight lost is often regained within one year, and almost all the lost weight is regained within five years.

Photo by AllGo – An App For Plus Size People on Unsplash

17 Ways To Avoid Your Family’s Questions This Holiday Season