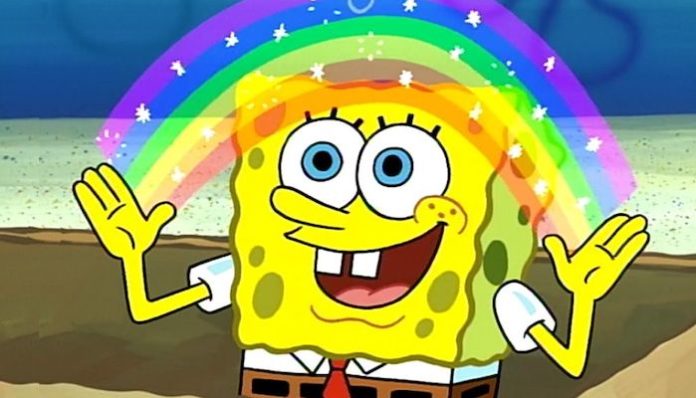 SpongeBob SquarePants has been a beloved character for generations, and people have long speculated about his sexual identity. For years, we’ve all pretty much agreed (and celebrated!) as a society that he’s gay.

However, SpongeBob’s cast has never formally confirmed his sexuality. In fact, in the mid-2000’s, the show’s creator, Stephen Hillenburg, said that our favorite sponge is actually asexual.

Buckle up, folks, because Nickelodeon just set the record straight.

This Saturday morning, the official Nickelodeon Twitter account posted a Pride Month-themed tweet celebrating the LGBTQ+ community. The tweet reads, “Celebrating #Pride with the LGBTQ+ community and their allies this month and every month,” and includes three images of beloved characters. One of them is SpongeBob, and his body has a rainbow sheen (an LGBTQ+ symbol).

Sure, the company didn’t explicitly say that SpongeBob is gay, but this seems to be a pretty clear message.

So who are the other two characters pictured?

The other two characters in the tweet are Schwoz Schwartz from Henry Danger and Korra from Legend of Korra. Now, Schwartz’ identity isn’t addressed in the show, but actor Michael D. Cohen plays the character. This is significant because in 2019, Cohen proudly shared the story of his “transgender journey.”

On the other hand, we already know that Korra is part of the LGBTQ+ community, though no one specifically mentions it in the script. The character has a same-sex relationship on the show, which the show creators later confirmed. In an epic message on the creator’s blog, Bryan Konietzko wrote, “You can celebrate [Korra’s sexuality], embrace it, accept it, get over it, or whatever you feel the need to do, but there is no denying it. That is the official story.”

In a time of prejudice, news like this is a welcome surprise. Usually, large companies don’t take a stand for minority communities. So it’s pretty damn wonderful to see Nickelodeon celebrating Pride and also confirm what we all believed about SpongeBob SquarePants’ sexuality.