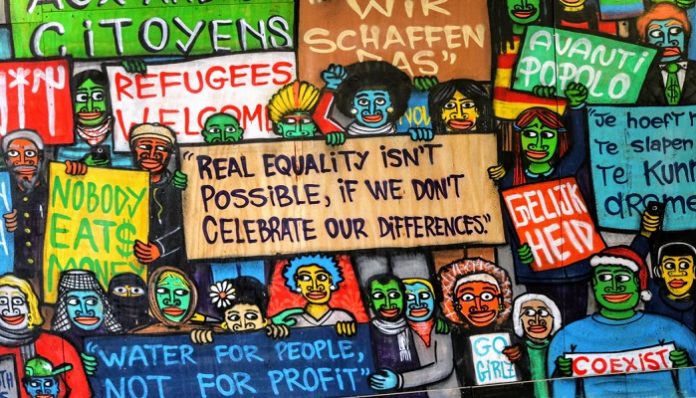 ICYMI, America is separating children from their families and placing them in internment camps.

Let that sink in for a moment.

No matter if you are a Republican or Democrat, your politics should NEVER supersede the idea that children should be separated from their parents. It is an issue of humanity.

Families attempting to cross into the U.S. border from Mexico find themselves in quite the predicament. Most of those families attempting to enter the United States are looking for a fresh start. They know America is the “land of opportunity” and they want a piece of the pie.

Regardless of how you feel about people coming into the United States seeking asylum, the bigger issue is the inhumane treatment. While I don’t agree with the United Nations Human Rights Council, the United States pulling out of it sends a terrible message.

One of the most prominent opposition statements come from all four living former First Ladies. Former First Lady Rosalynn Carter said that the separation of children from their families is “disgraceful and a shame to our country”. Former First Lady and the first woman to run on a major party ticket Hilary Clinton stated, “…every human being with a sense of compassion and decency, should be outraged.” She went on to counter Jeff Sessions claim that the separations were “following the Bible” with “Those who selectively use the Bible to justify this cruelty are ignoring a central tenet of Christianity. … Jesus said, ‘Suffer the little children unto me; he did not say, ‘Let the children suffer.'”

Laura Bush, the wife of George W. Bush, made it clear that even though she lives in a “border state” the act of separating children from families and the conditions they’re in is “immoral. And it breaks my heart.” Lastly, former First Lady Michelle Obama decided that she would not only support the statement made by Laura Bush but also added that “truth transcends party.”

However, the biggest elephant in the room is the current First Lady, Melania Trump. Mrs. Trump, who in fact herself is an immigrant, has been characteristically silent for the most part. Her statement said:

Mrs. Trump hates to see children separated from their families and hopes both sides of the aisle can finally come together to achieve successful immigration reform. She believes we need to be a country that follows all laws, but also a country that governs with heart.

It should come as no surprise that Melania would put blame on both sides and redirect the responsibility from her husband to Congress.

Luckily, not all hope is lost. Even though my blood boils whenever I hear Ted Cruz’s name, he is ATTEMPTING to rectify this situation. Mr. Cruz, a hardline Republican and overall embarrassment to the party, is working with his fellow Republican Senators to introduce an emergency bill.

The most vital part of this bill is requiring families to STAY TOGETHER. You heard me right. A REPUBLICAN BILL DOESN’T WANT TO TEAR FAMILIES APART. THEY DO HAVE HEARTS AFTER ALL.

Other provisions of the bill include an “expedited process”. This requires that immigrants with children have their asylum claims processed within 14 days; double the number of federal immigration judges from roughly 375 to 750; and authorize new family shelters for children and their parents while their asylum claims are being processed.

Unfortunately, Democrat Senators are not as impressed by this effort. The article states that Democrats are URGING President Trump and his crony Jeff Sessions to end the inhumanity.

Well over 2,000 minors have been separated from their families since the Department of Justice instituted their “zero tolerance policy” of criminally prosecuting those caught crossing the border illegally.

Thankfully there are organizations like The Texas Civil Rights Project to help those arrested find their children. They are working to get the names of all the children taken from those detained to ensure those children are not “lost” within the government. If you’re interested in helping their cause, you can donate here.

Continuously, more and more Senators, many Republicans included are calling for a freeze of this inhumane policy of separating children from their families. Senator Orrin Hatch (Utah) spearheaded an effort with his colleagues asking the DOJ to pause the separations.

Legally, President Trump and his administration are in for an uphill battle. Whether it’s Governor Andrew Cuomo (New York) suing the administration over this separation policy, or The American Civil Liberties Union bringing a class-action lawsuit in San Diego on behalf of those affected by this policy.

If you’re a decent and moral human being, you would be directly opposed to the separation of children from their families.

Samantha Bee, who has made it a mission with her show Full Frontal With Samantha Bee to speak out about the issues going on in our country, stood at the forefront of calling out hypocrites in our government. That includes Ivanka Trump. Continuously, Meghan McCain, the daughter of Senator John McCain (Arizona), echoed Bee’s statements during a segment on The View.

Meghan points out that Ivanka has been extremely silent and has nothing to say about the situation. Bee, notorious now for calling Ivanka a “feckless c**t” and faced her own backlash, did however achieve her goal. She said in a follow up statement, “I should have known that a potty-mouthed insult would be inherently more interesting to them than juvenile immigration policy.”

The only positive in all of this awful mess is that this is not a one sided issue. This is a HUMANITARIAN issue. No one wants to see children separated from their families. It is cruel, it is psychologically abusive and will cause irreparable harm.

My advice is to take to social media, tweet your representatives, call their offices, demand that they take action to end this cruel policy. This is our time as a country to come together and fight against injustice.