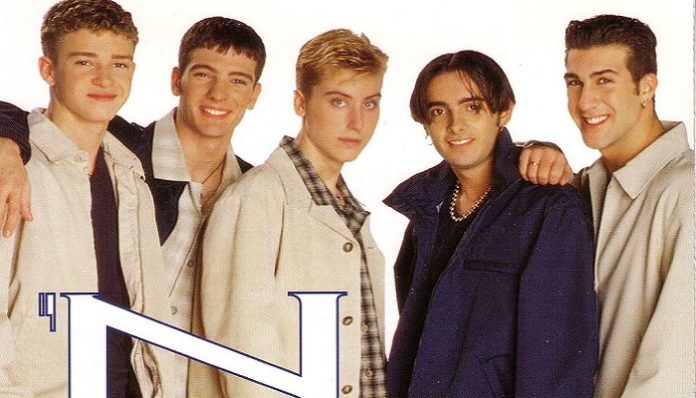 Today is the day our young, boyband loving hearts have been waiting for… *NSYNC is together again, and the timing is actually iconic.

JC Chasez, Justin Timberlake, Joey Fatone, Chris Kirkpatrick and Lance Bass reunited today, with No Strings Attached, to earn their star on the Walk of Fame.

And in true early 2000’s fashion, it certainly was fitting that they received it from none other than former MTV VJ Carson Daley, who co-hosted the event with Ellen DeGeneres.

Before the ceremony even began, fans lined up hours in advanced and serenaded the boys and their families with one of their classic ballads.

#NSYNC fans serenade the streets of L.A. with "This I Promise You" while waiting for the band's Walk of Fame presentation. Watch the ceremony here: https://t.co/Cp5sor6qIZ pic.twitter.com/SwCnpLNofp

During the ceremony, Chris and Joey were often seen cracking up and making jokes to one another, seeming to be genuinely appreciative and gratefu,l yet slightly embarrassed of their past lyrics (as Ellen proudly recited).

While on stage they joked with each other, held each other tight in a brotherly embraced and looked out to a crowd of dedicated fans who’ve never left their side. You couldn’t help but get emotional seeing them interact with their fans, almost like they were in shock, by the turnout and the screams they thought they escaped in the early 2000’s.

This is the most important day of my life #NSYNC pic.twitter.com/PyxnCRsv4W

During speeches, all five men seemed extremely emotional and grateful, emphasizing on the importance of each other and their fans. Lance had a moment where he proudly spoke of his troubled journey to accepting his sexuality during the years of touring. The most emotional was Justin, who seemed almost teary eyed talking about the support they received from their moms, and in disbelief of the love from the fans.

It was the definition of impactful and proof that fans are the most loyal kind of people you will ever find. All fans from back in the day are glued to their screens; looking at the pictures, videos and live streams and are being hit hard with emotions of love and nostalgia. Or as I like to say, re-living our youth in the best way imaginable.

Their star marks the 2,636th star to be created since the Walk of Fame’s completion in 1961, and is located near fellow boybands such as Backstreet Boys, Boyz ll Men and New Kids on the Block. But of course, fans had to show who they were truly loyal to.

The fab five seemed beyond appreciative during their speech, and smiled wide for cameras who were anxiously awaiting their return together. And This I Promise You, will go down in history books for one of the best ceremonies the academy has ever held.

But why does today, April 30th, 2018 so perfect for *NSYNC to get their star on the Walk of Fame? Because tomorrow…

I know, everybody take a moment to appreciate the person who organized this event and picked the perfect date imaginable.

Was it intentional or was it just a coincidence? Well, it can’t be confirmed, but it’s just funny that of all days of the year they would get their star on the exact day their hit song It’s Gonna Be Me skyrockets in hits because tomorrow it will be May.

And no, Justin didn’t acknowledge it during the ceremony, but thankfully JC did. (Let’s be real, I’m sure Justin is hella annoyed, embarrassed, and thinks he’s too cool for that.)

To celebrate the monumental occasion, the groups management even opened up a pop up shop in LA full of old and new merch fans can buy, and a new section on the bands official website as well.

All week we’ve been teased by the members of the group with some hilarious and heartwarming pictures and videos on social media to help grow the anticipation. I think it’s safe to say they were more excited than the fans.

The serenading JC is so lifelike at #TheDirtyPopUp !! Step it up Madam Tussauds. (Swipe for more pics from the weekend)

But in all seriousness, it was about damn time these 5 gentlemen were recognized for their achievements and attributions in the music industry, and were celebrated. It’s so long overdue! I mean, look at them, they’ve aged like fine wine and still got it going on! It’s tearing up my heart to see the love they’ve received even after all these years apart.

Sadly, I don’t think all the nostalgic memories and heartfelt messages will be enough to bring the boys, *cough* Justin Timberlake *cough* back together as a group, but it hopefully will be the start of something new and we could potentially see a bit more from them in the future.

All I really have to say is, *NSYNC, I want you back!

Featured image via “nsync” by jonobacon / CC BY