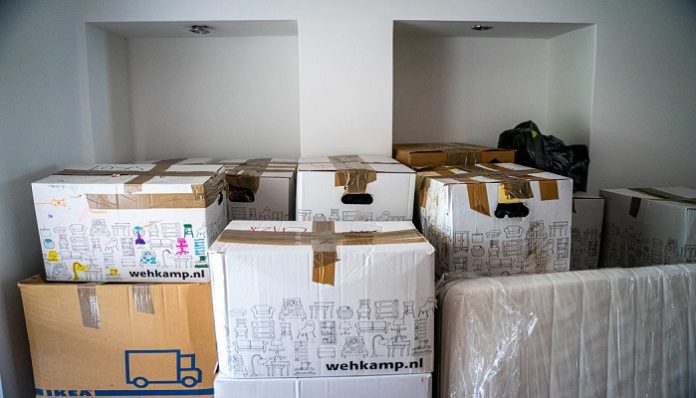 I’ve only moved a small handful of times in my life (and quite a few more if you count moving back and forth between the dorms and home), and I can tell you that each and every time, I hate it more and more.

It’s expensive and time-consuming, especially when you have to track down all those boxes, and if you can’t find them, you’re left shelling out the dough to buy them from the store. Well let me tell you, I have had enough.

And with my upcoming move next month (just to the next town over, thank god), I was determined to make moving my b-word this time, instead of the other way around. Luckily for you, I am also one of the laziest people ever and I’m always looking to cut corners, so I was able to come up with a couple good moving hacks for you.

For items coming out of your dresser, what if I told you there was a way to move it without using boxes? Guess what? There is. You don’t want to move the dresser with the drawers in them as that just gets heavy and hazardous, but you also don’t have to include boxes either. Head over to your nearest hardware store and get yourself a roll of stretch wrap, or steal some from your kitchen. Pull the drawers out and wrap them tight to keep the clothes inside and voila – you just saved yourself the time and money of repacking and unpacking them into boxes.

You never truly understand how time-consuming it can be to take every article of clothing you own off the hanger, fold it up, put it in a box, unpack it, and hang it up again until you’ve done it once or twice. The easiest way to beat this is to use drawstring garbage bags. Load a bunch of your clothes (capacity varies based on clothing type) into the bag while still on the hangers. Pull the drawstrings tight around the hangers and tie them to hold it all together. Easy to move and they won’t get dirty.

I keep my shoes in Rubbermaid bins. So when I move, why would I unpack them into boxes just to dump them back in? If there’s an item that you think will fare well in a Rubbermaid bin for future storage at your new place, splurge on the bins before you move and kill two birds with one stone.

If you’re in a situation where you can spread out the move over several days and make multiple smaller trips instead of one big one, this one is for you. If you’re limited on boxes, load them up, move them, and unpack them right away so you can reuse them. It also helps with your procrastination when it comes time to unpack.

Being the father of twins and having to make multiple moves a year due to this, my father invested in one of those moving harnesses. They’re great for moving larger furniture. It comes in a set of two, so you’ll need two people. Each has a harness on and they’re connected by a thick strap in the middle. You load the furniture onto the strap and it instantly makes carrying a heavier load much easier.

You don’t know the struggle of being in the middle of unpacking when suddenly you really gotta go but you have no fricken clue where you’ve stashed the toilet paper. Pack everything you might need the first night or two in a separate box. Make sure you label all of your boxes too with what’s in them and what room they belong in. You’ll thank yourself later.

I love new furniture! New furniture is so exciting. Nowadays, you can order everything online. If you’re like me, you can’t wait for that new shiny bed or dresser. However, cut your haul in half by waiting to order your new stuff until a day or two after you move in. You may have to go a couple days without a bed, but in the end, it’ll be less work for you.

If you’re renting, this is so important. In order to cover your own ass from damage the previous tenants might have left, make sure to document any and all damage you see before you start moving stuff in, even the minor damage, and make sure to let your landlord know right away so you don’t end up paying for something that’s not your fault.

So there you have it. I hope you can use these tips to effectively and efficiently cut corners like I did. Moving is no picnic, so the quicker and easier it is, the better. Happy moving!