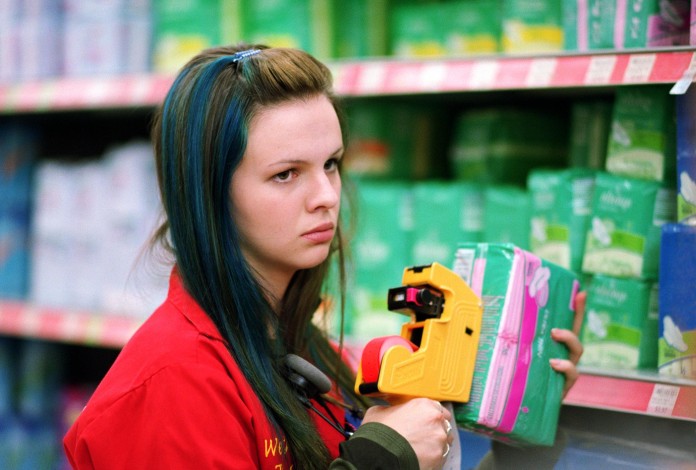 I’m definitely in the running for a former employee of one of the worst part-time jobs ever: as a means of fundraising, my dance team and I ran a concession stand at all New England Patriots games at Gillette Stadium, which entailed waiting on drunk football fans (and you haven’t seen a football fan until you’ve met a Pats fan) in the absolute freezing cold.

The amount of utter bullsh*t my teammates and I put up with as employees of this place was actually ridiculous, and as football season is upon us again, I can’t help but cringe at all the crap people put up with working part-time or minimum wage jobs before they snap and quit. Seriously, though, minimum wage workers of the world, it’s time to unite because we’ve put up with it all (until maybe we can’t put it with it anymore).

After graduation, one of my friends, who has a long history of working in retail, started working at a store until he got a full-time job. He was pretty stoked knowing he’d be back in retail because it promised to be a pretty easy gig considering all of the experience he already had. Too bad the store manager treated him like a total delinquent and idiot when training him, as if he’d never even walked into a clothing store before. Like, yes, thank you, not to be a snob but I have a bachelor’s degree so I think I can follow the prompting on the screen.

I can’t tell you how many times this has happened at the stadium. Gillette Stadium has an exceptionally strict policy where they stop selling alcoholic beverages halfway through the third quarter of the game to help prevent drunk driving. Naturally, people don’t take this all too well. I’ve been called names I’m definitely not allowed to write on this website, and seen supervisors simply watch as I or one of my teammates is being verbally abused. Um…okay, see you never, Mr. Supervisor.

You’re wrapping up your final table of your 8-hour shift when your boss approaches you. “Hey, yeah, so someone called out, so can you stay for their shift, too?”

We’ve all heard those horrible words, and we’ve all had to say yes because honestly, we only have about four dollars to our names. But the problem is, once we say yes the first time, our bosses go to us to cover shifts all the time, because they know you’re in no financial position to turn down more hours…until you realize you can get another waitressing job at a better restaurant with better tips where the boss will respect your time. Then it’s peace out, Cub Scout.

I have a friend who shall absolutely remain nameless who once had a manager make repeated advances on her. Despite making anonymous phone calls to the company’s sexual harassment hotline, nothing was getting better at work. Needless to say, her employment at that company didn’t last long.

I’m definitely not looking to start a grudge match with Patriots owner Bob Kraft, but I’m just saying that employers who kind of abuse labor laws aren’t all that uncommon. But you know what else isn’t uncommon? Workers who quit because of it.

We all have that one moment in life where we learn what is and is not appropriate when you’re a minimum-wage or part-time employee…and let’s just say that moment is when your boss is patronizingly asking you to say eight extra hours without getting a break all the while squeezing your butt. Happy working, folks!

Featured Image via Screengrab of The Sisterhood of the Traveling Pants.