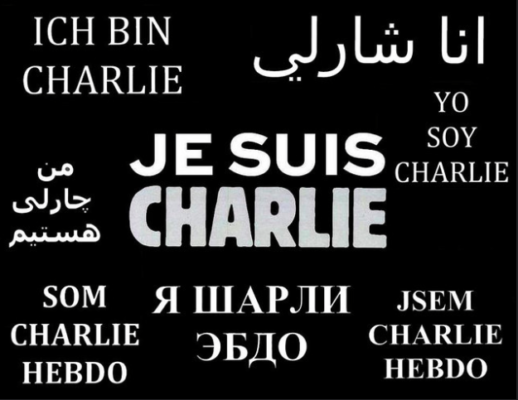 In wake of the tragic, nefarious terrorist attacks on the satirical news publication Charlie Hebdo in Paris on Wednesday, I write with a heavy heart and reflective mind. This catastrophe is all that’s been on my mind these past few days, really, as it consumes my thoughts with the looming, scathing question of why. Writers murdered, callously in the name of their work—their art. Policemen slaughtered too, as they fought courageously in the line of duty.

As the world unites in mourning, there has been much discussion about freedom of speech and its endangered future: what does this mean for the posterity of journalism, writing, and all other forms of expression? This haunting question rattles me to my core as I’ve wanted to be a journalist much of my life. The trending topic #JeSuisCharlie (I am Charlie) began circulating Twitter and other social media outlets following the news of the tragedy. One particular tweet resonated with me deeply: “Guns run out of bullets. Journalists will not run out of words.”

How aptly put, I thought. The world keeps turning. Life keeps happening. Journalists keep reporting, despite the horrors they witness or face. Charlie Hebdo had the courage to continue to publish its controversial content, despite its editor Stephen Charbonnier encountering many impending death threats in the past. For this reason, he and the many others who lost their lives did not die in vain. They died in the name of the beliefs that dictated their work and their lives.

But this tragedy isn’t just alarming to those who are aspiring reporters; it’s an issue that unnerves us all. The threats facing freedom of speech in the 21st century transcend journalism, satirical or otherwise, and become a matter that touches us all. Freedom of speech is a foundation on which we all stand proudly: reporters and their readers and viewers; politicians and their opponents; writers and their critics; and even bloggers like me, voicing opinions on the internet for those who care to read. We all deserve the right to say what we need to say, what we want to say. And so speak our minds, we will. No one can ever take that away.

10 Songs Lyrics You Need To Live By Everyday