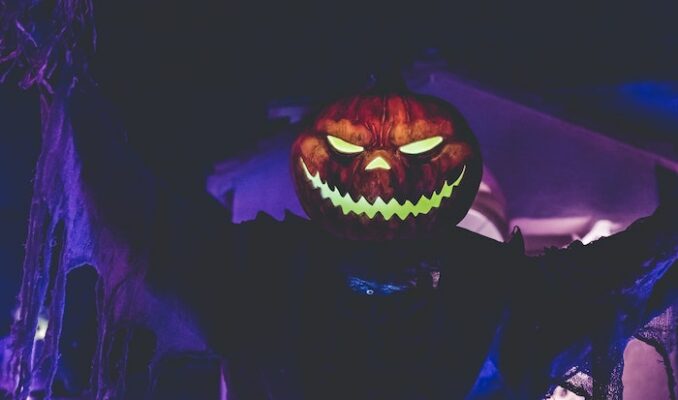 Spooky season is coming, and we know what that means! Halloween-themed content is one of the most fun aspects of October.

Whether it’s a horror movie or a Disney Channel show about witches, everyone can find something to enjoy this month.

Here are 31 spooky books, movies, TV shows, songs, and musicals for each day of October.

When Marnie and her siblings discover their grandma is a witch, they travel to her home in Halloweentown to hone their powers. Then they fight the evil threatening the magical creatures living there.

I highly recommend watching at least up to “Halloweentown 2: Kalabar’s Revenge” because that is the best Halloweentown movie (you can fight me on this).

We can’t leave out a classic! Also, catch the sequel, which is coming out on September 30.

If you’re in the mood for a slasher horror, you can’t go wrong with the “Scream” movies.

4. “The Nightmare Before Christmas”

Is it a Christmas or Halloween movie? I say both! Watch Jack Skellington try to take over Christmas when he tires of Halloween.

This is the most underrated Halloween DCOM! Long-lost twins Alex and Cameron not only find each other but discover they are witch princesses from a magical kingdom. And the kingdom is in trouble.

Also, check out the sequel “Twitches Too”!

This spooky comedy centers around a quirky family who attempt to reconnect with a long-lost relative. But all is not as it seems with him.

The word “Halloween” is literally the title. So if you want a Halloween horror movie, this is the one!

This supernatural comedy follows a family as they try to break a curse on a house.

There’s nothing to get you in the spooky mood quite like a Tim Burton comedy about summoning a demon to terrorize a family into leaving their new house.

Also, check out the Broadway musical version for some great songs.

This movie (and its theme song) will never not be iconic.

This horror movie details the Headless Horseman’s murders in a small village. Also, check out the web series based on “Sleepy Hollow” called “Headless.”

12. “House of Hollow” by Krystal Sutherland

This book is for you if you want horror and gore mixed with a floral and Tumblr soft girl aesthetic. After her sister goes missing, a girl must grapple with her own past disappearance.

13. “The Inheritance of Orquídea Divina” by Zoraida Córdova

Imagine “Encanto” but with murder. A family must uncover their grandmother Orquídea’s past when they are gifted mysterious power from her when she dies. Oh, and a mysterious figure is killing the family off one by one.

When Coraline is dissatisfied with her life, she turns to an alternate version of her family with buttons for eyes. But this other family is hiding a terrible secret.

Also, check out the movie version of this book!

15. “Murder on the Orient Express” by Agatha Christie

Honestly, any Agatha Christie book is good for spooky season. But this book has an especially interesting outcome.

16. “Under the Whispering Door” by TJ Klune

If you want a comforting book about death and ghosts, this is the one for you. When Wallace dies, he appears at a tea shop between death and what comes next. He can go through the door to the afterlife whenever he wants. But the more he makes connections with the people at the tea shop, the less he wants to leave.

If you aren’t caught up on this cultural phenomenon, now is the time. Watch a group of small-town kids fight monsters from another dimension with their superpowered friend.

This show is underrated and perfect for Halloween. A family whose father was recently murdered moves to his family home. There, they discover keys that grant them magic powers. But a demon is also on the loose and hunting for the keys.

This adorable animated show follows the story of Luz, a normal girl who wants to be a witch. When she ends up in a magical world called the Boiling Isles, she tries to make that dream a reality while navigating the dangerous new world.

The campy vampire romance queer women needed. Juliette and Calliope are in love. The only problem? Juliette is a vampire, and Calliope is a monster hunter.

This is the show for you if you want to see incredible spooky baking creations and get some baking inspo.

It’s a cult classic for a reason. The early practical effects might be terrible, but that’s part of its charm. And the show packs a serious emotional gut punch over its seven seasons.

24. “Wayward Guide for the Untrained Eye”

This is a web series about a mysterious series of small-town killings that appear to be a werewolf’s fault. Its companion podcast makes this a fascinating multimedia experience.

This song is like a horror movie in three minutes. Billie knows how to deliver creepy vibes.

26. “The Monster Mash” by Bobby Pickett

It is illegal to go an entire Halloween without listening to this song. Sorry, I don’t make the rules.

27. “Bring Me to Life” by Evanescence

The line “wake me up inside” truly wakes the emo kid within us all.

If you ever went to a Halloween dance in middle school, you are familiar with this song.

A musical about a bloodthirsty plant? Sign me up!

They literally drop a chandelier on the audience. You can’t get more metal than that.

Cannibalism and show tunes sure do mix well together in this musical!

I hope this helps you prepare for the spooky season spirit. What Halloween-themed media do you recommend? Let us know in the comments!

Photo by Kenny Eliason on Unsplash