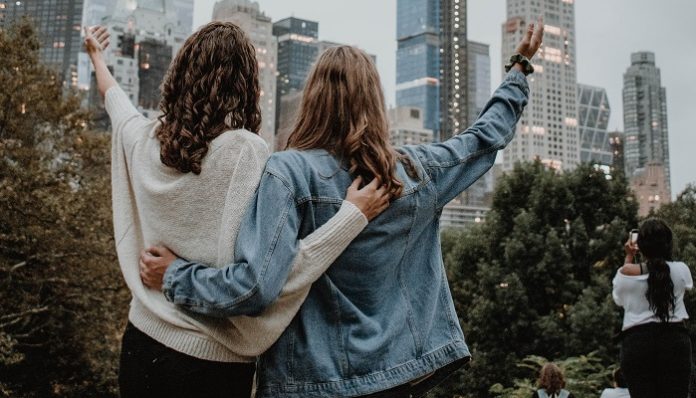 Eight years ago, my brother came over and introduced our family to his friend. I absolutely loved this person. I don’t even remember what we talked about, but I do remember that time flew by so fast together.

By the end of the night, we were baking cookies together. A few months later, my brother and this person changed their relationship into a romantic one and I was beyond excited.

As time passed, we grew closer and our friendship was building.

But, I have to be honest here, in the back of my mind, there was a doubt about what would happen if they broke up. My brother’s partner promised me that no matter what happened between him and this person, we would remain friends and we’ve been best friends ever since.

It took forever for me to figure out the difference in our relationship from “my brother’s ex” to “my friend.” I always felt conflicted.

I didn’t want either of them to feel like I was choosing sides.

And though my brother supported my friendship with his ex, others were not so supportive. Over time, I learned that there was one person specifically who disagreed with my decision to maintain this friendship and even questioned my loyalty. Oftentimes, they would make me feel guilty and even try to convince me that I was doing something wrong.

Unfortunately, I think this is another norm that society has created. It has become more of a popular opinion that being friends with an ex of someone you’re close to, whether it’s a relative or friend, is wrong. Society views this as taboo and something that can’t and shouldn’t be discussed. At the end of the day, I think what we need to be concerned with is if our friendship is hurting anyone. If the answer is no, then I see no problem with it.

I think sometimes when people express concerns over something that does not have anything to do with them directly, it may be a way they show their insecurities.

Maybe their opinion is coming from a lack of understanding or them having been on the receiving end of a similar situation that did not go well. I feel it is important for people to grasp that no two situations are the same. And expressing their opinion in a more civil way would go over better than nitpicking and bringing down others which seems to happen more often than not.

We as a society should become more accepting of these types of friendships. Though it doesn’t happen all that often, it does indeed happen and people need to view this as okay.

Everyone deserves friendship and connection.

How they came to those friendships should not be a reason that they are constantly made to feel bad about. No two relationships are the same.

I would be lying if I said at first there weren’t some comfortability issues on my brother’s part, but he came to see how genuine and real our friendship became. He understands and is happy for me. I realize that because of my brother, I have one of the strongest, healthiest and one of the best friendships I’ve ever had. It just so happens that it’s my brother’s ex.

To My Younger Self: I Am Not the Woman You Expect