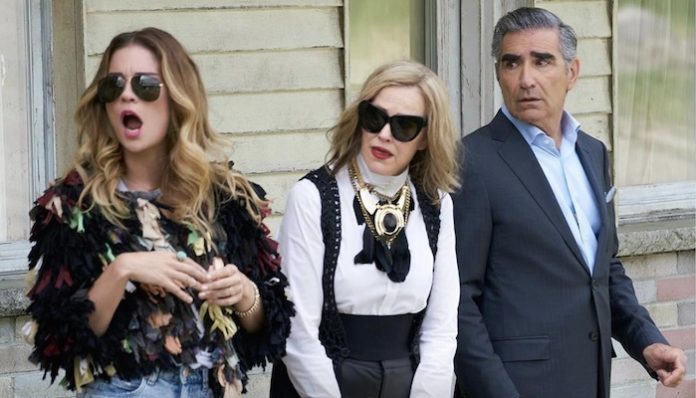 Schitt’s Creek took the world by storm when it debuted in 2015, creating somewhat of an online cult following. While we’re still in mourning over the end of the Canadian comedy series earlier this year, and celebrating their historic Emmy takeover; there are several fun facts a lot of people don’t know about the show!

1. Dan Levy created the show based off of a thought he had while watching reality TV.

Levy said in an interview that he was watching reality TV one night and thought, ‘What would happen if all these celebrities lost all their money and had to start over. Would they even know how to deal?’ And voila, the show was born!

2. Eugene Levy named the show during a dinner party.

In typical Johnny Rose fashion, the name ‘Schitt’s Creek’ was created during a dinner party with his closest friends. While the crowd giggled over jokes about ‘Schitt’s hardware store’ Levy kept it in his back pocket to pitch to his son at a later date when creating the show.

3. The show was filmed in Canada.

Not only does it star a handful of Canadians and is created/written by Canadians, but the show is also filmed there too — in Goodwood, Ontario. According to the cast, they’d often set up lawn chairs to watch scenes and be used as extras. They also filmed some scenes in Uxbridge, Ontario from time to time, where Hayden Christensen and Avril Lavigne formerly owned homes.

While we all know her signature line, “ew, David,” as iconic, many don’t know the way she holds her body was as intentional as her valley girl voice. According to actress Annie Murphy, she would purposely hold her hands as though she was holding a purse 24/7 — just like the Kardashians do.

5. Moira’s fashion was all Catherine O’Hara.

Catherine insisted on Moira’s many wigs and tried to get as many on set as she could. However, her impressive wardrobe was based on Daphne Guinness — someone whose fashion sense was perfect for O’Hara’s Moira character.

6. Twyla has a family connection.

Although the Levy men were cast as the father and son in the Rose family, the family connection doesn’t end there — one of their real-life relatives was cast in a separate role. Eugene’s daughter and Dan’s big sister Sarah Levy snagged the role of Twyla Sands. So no, Alexis isn’t really part of the family.

7. Noah Reid, who played Patrick, was a child actor you’ve probably seen before.

Obviously, a lot has changed since puberty, but Noah Reid once starred as the leading role in one of the most iconic childhood cartoon shows ever. As a child, he played the lead role of Franklin-that’s right, the talking turtle who could count by twos and tie his shoes. He also created his cover Simply The Best by himself, which makes him that much more awesome.

As one of the most hilarious scenes in the entire series, Alexis’ song ‘A Little Bit Alexis’ instantly became a memorable moment. However, we can all thank stars like Britney Spears for the inspiration. It was also an idea that it would also act as the title of Alexis’ reality show if she had one.

Although we know and love her as Alexis, Annie Murphy originally auditioned for the role of Stevie. Murphy told Vulture, “I auditioned for Alexis and I got a call from Dan [Levy] after my first audition, asking me to also audition for Stevie,” she said. However, when they saw the natural connection between Emily Hampshire and Dan Levy they switched her back.

10. Catherine O’Hara made up Moira’s accent during her first scene.

Eugene pitched his longtime comedic friend to Dan when creating a cast and she was eventually the only front runner for the role. However, no one knew how Moira was going to sound until she started speaking when they first filmed — not even the actress herself. Clearly, she deserved her Emmy Award.

11. The show’s ending was intentional.

Daniel Levy has been very vocal about preserving the special connection fans have with the show and his decision to end it after 6 seasons. “It’s good to have warm memories in people’s minds,” he said on the Today show. “That’s what is going to live on longer than if we overstay our welcome.”

Watching the Schitt’s Creek cast sweep this year’s Emmys really made me miss the camaraderie between the cast and the power of watching the little show that could grow into something huge. Hopefully, we do get the occasional holiday special like the cast has teased, because that would be, like, totally epic.