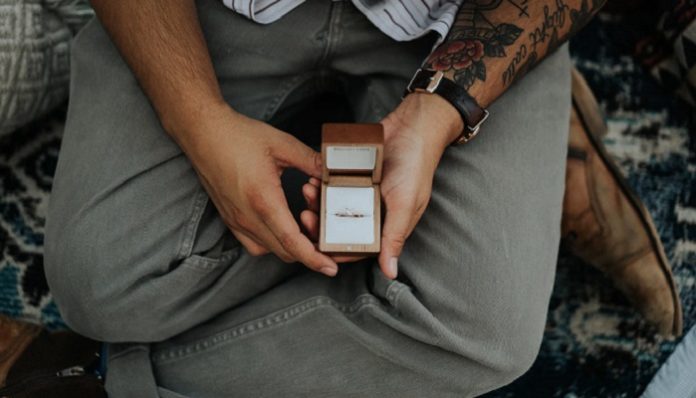 The last year of my life has been a whirlwind, to say the least, and it all started when I decided to call off my engagement and make a drastic life change.

I was tired of feeling “safe,” of doing what I thought I should be doing at my age, and of being with someone who wasn’t the right person for me only out of convenience. While it took me a while to truly understand the scope of my decision prior to making it, breaking off my engagement was the best decision I ever made.

My relationship was far from healthy, and it was only after the breakup that I realized that the person I was with was manipulative and changing who I was as a person, altering my identity and my personality.  I was going along with it only to appease her. Looking back, I missed so many red flags and I let so many others go without trying to change anything.

I was afraid of hurting someone else’s feelings, so I sacrificed my own until I stopped and stood up for myself and what I believed in.

In the year since I called off my engagement and broke up with my fianceé, I have experienced so many new things and have been able to make new memories that were all my own. They weren’t shared with anyone in particular or intrinsically tied to only one human being.

I started saying “yes” more than I said “no.”

First, I said “yes” to living on my own. When I say living on my own, I mean all by myself. For the first time in 26 years, I was truly left to fend for myself. Up until that point, I had either lived with my parents or with my ex (my freshman year dormitory experience does not count because I lived 15 minutes away from home and spent more time there than in my dorm). My freedom truly felt like freedom. It would be weird at first coming home to an empty apartment,with it being only me there, but over time, it became natural and enjoyable. It also forced me to financially handle all the liabilities of living on my own, and while that’s been a struggle, I wouldn’t want it any other way.

Am I still paranoid at night when I hear random noises in my apartment and think someone is trying to kill me? Sure, but I’m overcoming that on my own and I’m happy I’ve given myself that chance to face my fears by myself.

When I realized that I only chose my “career”  to placate my significant other, I took a step back and examined what I wanted in life. At 26 years old, I shouldn’t feel like I’m settling. So, instead of sticking it out and finding something better, I decided that I was going to quit my job. That sounds super crazy, especially in today’s society, but as a true millennial, I needed more out of life.

The conversation I had with my boss after I told him that I would be resigning to go travel was hysterical because I told him my decision to leave wasn’t because I needed to “go find myself” like most of my peers, but because I needed a reset on life. Up until that point, I had always played it safe. I never truly went anywhere on my own. I had never picked up and taken a trip and skipped out on life’s responsibilities. I’m very lucky that I had a great boss who was understanding and knew that I wasn’t happy where I was at, and for that, I’m grateful.

The five weeks I spent traveling throughout Australia and New Zealand was incredible. I met so many new people, learned so much about myself and my resilience and gave myself a new mindset. If anything, I truly overcame my hesitancy of flying and air travel (but still thanked the Lord every time I landed safely somewhere). Being over 10,000 miles away from my safety net and everyone I knew was hard, but it also forced me outside of my comfort zone. When I put myself outside of my comfort zone, I excelled.

During that time I listened to a lot of music that served as therapy, and I realized that this was the first time that it felt okay for me to be truly vulnerable  Subsequently, music made me more in touch with my emotions and allowed me to have a different outlook on certain situations. I was more self-aware and cognizant of my .environment, the people with whom I surrounded myself and what I wanted out of life.

I definitely put my health and fitness on the backburner when I was in my relationship. There is a common belief that people put on weight during long-term relationships, especially after college, which could not have rung more true for me.  Subconsciously, I was so unhappy with myself, my relationship and my situation that I was binge-eating and not caring about how I looked because I didn’t need to. That led to increased weight gain.

It wasn’t until I saw a photo of myself  that I realized how heavy I had become. Mind you, I have always been on the thinner side, but my face was fuller and I was on the road to a true “dad-bod,” which was beyond unflattering. I was having to constantly buy clothing in larger sizes, and it was a nightmare.

That is when I stopped saying “no” to working out and started saying “yes.” While my first experience with group workouts at Orange Theory ended poorly, I had found a new place that I could push my limits and get a great workout at the same time.

Every time I went to 9Round, however, I felt like I was at home, and I was seeing the results. Of course, it was a great combination of working out and diet, but it was also boosting my self-confidence. On top of that, I was appreciating the feedback I was getting from people about how good I looked and that I was in the best shape of my life.

Continuously, because I was in such good shape, I started running. Running not only served as a therapeutic way to clear my head, but also a way to maintain my exercise. In addition, I was a platform to share an interest with many of my friends that didn’t involve drinking and eating. Since my breakup and my willingness to say “yes”, I have done a handful of 5Ks and other fun runs, and I have managed to beat my time each and every time I complete them.

Up until my breakup, my life had been in second gear and closely resembled the lyrics to the theme song from “Friends.”

Once I started saying “yes,” I started giving myself the opportunity to grow, to learn and to become a better version of who I am. This past year, if it wasn’t for my friends who encouraged me to say “yes,” I don’t know if I would have made it through.

Like my girl Kelly Clarkson says, “Since u been gone, I can breathe for the first time.”