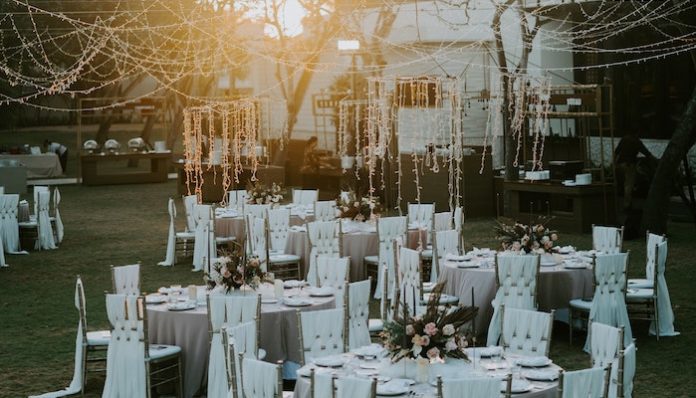 I’m so sick of wedding traditions. I cringe each time an invitation arrives in the mail because I can already play out the entire mundane evening in my head. After not enough cocktails I’ll be whisked off into a big fancy room with big elegant centerpieces that I won’t remember. I’ll dance to Celebration and Shout and maybe even do the YMCA, but I’ll be sitting a lot because I’m wearing the same nude low heels I wear to all of these things, the ones that promise comfort that they don’t actually offer. Then, after five hours of picking at the same caesar salad and consuming the bride and grooms signature cocktail by the gallon, all I’ll be thinking about is how badly I want that party bus or van or cab that’s taking me back to my hotel to arrive on time.

For once, I want to walk into a wedding and be greeted by dozens of munchkins from The Wizard of Oz or even a bunch of guys with those light-up swords from Star Wars. But what can I expect?  Most wedding traditions have been around for so long that few people even know where they’ve originated from. We follow in our parent’s footsteps, as they followed in theirs, and so on without giving any of the strange things we do during this celebratory time in our lives a second thought. Perhaps it’s time to change that

Before you walk down the aisle with the one you love, know where each of the traditions you’d like to partake in stemmed from. Know that weddings weren’t always fun for brides. Know that they weren’t traditionally seen as a celebration of love. In fact, for women, they weren’t even always optional. And while arranged marriages are hardly an American tradition these days, know that it’s still commonly practiced among other cultures and that many of our most adored wedding traditions stem from these kinds of practices. A time when girls were seen as little more than their father’s property until they were married off and possession was transferred to their husbands. Once we all know and understand this, then maybe we can ditch some of these sexist wedding traditions for good.

A girl was considered her father’s property until she was married, and I say, girl because they were often married off before they became much of a woman by today’s standards. A man would ask a girl’s father for permission to marry his daughter, not because he was in love, but because he would be receiving a piece of land or a huge amount of money from his new wife. These gifts, called a dowry, were a sort of incentive to attract men who held a certain position in society, and only a girl’s father could decide if a man was worthy of his daughter’s hand. If a man were poor, it would be much harder for him to marry off his daughters as likely he had nothing to offer as an incentive. This arrangement ensured that those regarded as high society members wouldn’t marry below their economic value.

While this tradition isn’t as common today as it was even a decade ago, there are still many people who find this appropriate. By asking a woman’s father for his daughter’s hand in marriage, it promotes the idea of inequality between the two partners. It says that women can’t make such an important decision on their own and that their fathers are still in control of their lives even after they’ve entered adulthood. Men have never needed their father’s permission to get married, so why should women? Let’s ditch this wedding tradition and instead ask for support from all family members on both sides.

Tossing of the Bouquet

Hundreds of years ago, after a wedding ceremony was complete, the new bride and groom would head to a separate room to consummate their vows. It was thought that then that by touching the bride on her way to the room brought that woman good luck, and many people would try to rip the bride’s gown off and other accessories. It’s said that to distract some of these people from groping her and ripping her clothes, the bride would throw her bouquet and the women would try to grab it so they would receive good luck from the bride. This gave her the opportunity to get away from them.

Now, the toss of the bouquet is designed to give the prospect of marriage to single women at wedding receptions, not exactly portraying us in the best light. The tradition of tossing the bouquet is degrading and gives people the perception that all single women are in desperate search of a man to walk down the aisle with. If you really want people to take home flowers, give them your useless centerpieces that you spent thousands of dollars on and call it a day.

Tossing of the Garter

Stemming from a tradition far worse is the tossing of the garter. During the same time period that women were tossing their bouquets to get people to stop grabbing at them, witnesses were required to be in the room where the marriage was being consummated. Some of the guests who were invited to witness this would choose to participate by crowding the couple’s bed, ripping the bride’s clothes off as they were still considered to be good luck. Sounds romantic, right? Over time, people came to their senses and thankfully realized how utterly disturbing this tradition was. The groom would instead take off a piece of the bride’s undergarments in private, and toss it out to the witnesses on the other side of the door. This was recognized as enough proof that the union was official and the bride was deflowered.

Today this oversexualized tradition is performed in a room full of friends and family watching the groom stick his head under his new wife’s dress to remove her garter with his teeth. Then the lucky guy who catches it gets to feel up the woman who caught the bouquet, by slipping the garter up her thigh. Nothing sounds more romantic than being groped by a stranger while a hundred people watch and cheer! This tradition unfairly implies that it’s okay for men to be sexual in public, and rewards them with a socially acceptable opportunity to feel up a random woman, while we get stuck with marriage as our reward for catching a bunch of flowers that’ll end up in the garbage in a few days. That doesn’t sound fair to me.

Being Referred to as “Mrs. His-Name”

Whether a woman chooses to take her husband’s last name or not, she is still an individual. However, too often they’ll be introduced at their own wedding as “Mrs. His-Name” as if getting married erased her identity. You wouldn’t introduce Victoria Beckham as Mrs. David Beckham. Posh Spice wouldn’t stand for such an insult! So, why do we announce newlywed couples this way when they make their grand entrance? Why do we send out invitations this way? My father isn’t even alive anymore, and my mother still gets invited to weddings using his name. He’s gone, and she still can’t be referred to as an individual.

This tradition stems from hundreds of years of women being considered their husband’s property after marriage. Women couldn’t open a bank account, or own land, or keep their earnings from a job. Even the land given to the couple in their dowry by the bride’s family was put in her husband’s name. This way of thinking still existed so recently, that most older women would probably still like to be addressed this way, but it’s time to let this tradition die with that generation. There are so many other ways you can refer to a married couple. Mr. and Mrs. David and Victoria Beckham for one or simply Victoria and David Beckham. It’s not rocket science, but the woman needs to be included.

Carrying the Bride Over the Threshold

As I mentioned earlier, marriage wasn’t always a choice. Even today, many cultures encourage arranged marriages. This disturbing tradition was started by the Ancient Romans, who literally would have to force their new bride into their homes by dragging them over the threshold. Whether the bride wasn’t keen on leaving her family home or just not keen on the guy differed from bride to bride, but either way, women were dragged into the homes of practical strangers unwillingly where they would be forced to consummate the union. Not exactly the romantic gesture we’ve come to know it as today.

The history of the bridal shower demonstrates how truly remarkable women are. Even hundreds of years of oppression couldn’t deter them from figuring out a way to marry the man they wanted to. On the occasion that a girl’s father would deny her permission to marry someone that asks, he also denies her collection of her dowry or her inheritance. Staring around the 17th century, the friends of these women would present the bride-to-be with gifts to make up for the dowry she wouldn’t be given by her father so that she would have everything she needed to get married and start a life of her own without her father’s permission.

Over time, this tradition has morphed into a more materialistic event, as we gift brides-to-be with an upgraded set of silverware or coffee machine or whatever is on their registry, but that’s not all brides. More recently couples have been creating honeymoon funds rather than a registry or asking for people to make donations in their name instead. Keeping the tradition of bridal showers is important to the history of the women’s movement, but it’s also important that we all understand where it stems from and what it’s original intentions were.

There’s nothing wrong with wanting nice things, as long as you’re aware of what women went through hundreds of years ago to get you that new toaster oven.