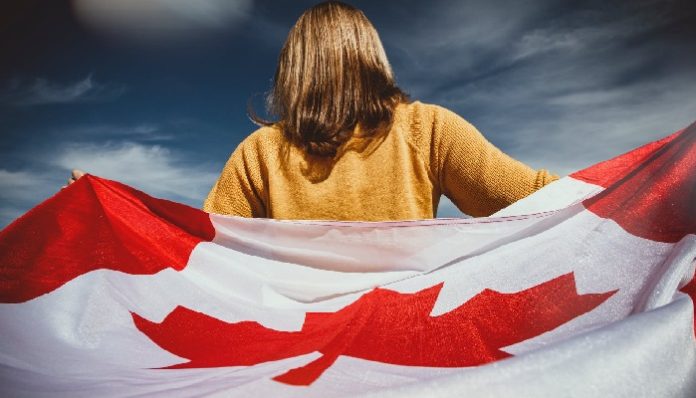 Americans: you rarely think about the Great White North, do you? You probably still think Canadians are too busy fur trapping and playing ice hockey to make public policy, or perform radical change, or to do anything other than drink beer and sip some maple syrup in the snow. Little do you know, Canadians are up there living the dream. Here are a few things they are totally doing better:

Although the US has Hillary Clinton in the running to be the next president – which is a great first step – government offices around the country don’t have nearly as many women as men holding positions of power. As reported by Catalyst, in 2015 the House of Representatives had 19.3% spots held by Women, with 80.7% Men and the Senate had 20% Women, and 80% Men.

Meanwhile, in Canada…Newest Prime Minister, Justin Trudeau, for the first time in Canadian history made his cabinet equally 15 men, and 15 women, all holding the same executive seats in Canada’s government. And when asked why? His answer was as so:

The legal drinking age in Canada is 18 or 19 depending on what provincial body you reside in, while most of America’s is 21. That means that while Americans are still partying in the basement of their student houses, Canucks up north are sunbathing on public patios with a strong beer in hand. Need I say more?

In Canada, you’re automatically covered by health care at birth, it isn’t dependent on your job or your income. In Canada, healthcare coverage stays with you your entire life, not for however long you can afford it. In Canada, when you go to the doctor, the first thing they ask is “What’s wrong?”, not “What kind of insurance do you have?” These are just a few of the reasons Canadians are receiving better healthcare than Americans…If you’re interested in further validation check out this list right here.

As a Canadian student, student debt is a way of life. But when I see how much it costs my American friends to attend University? Well, I don’t feel so bad. The University of Toronto is one of the largest universities in North America (85,000 students) and one of the top 20 universities in the world. This is how tuition at the The University of Toronto compares to many large state schools in the US, nearly half the price! 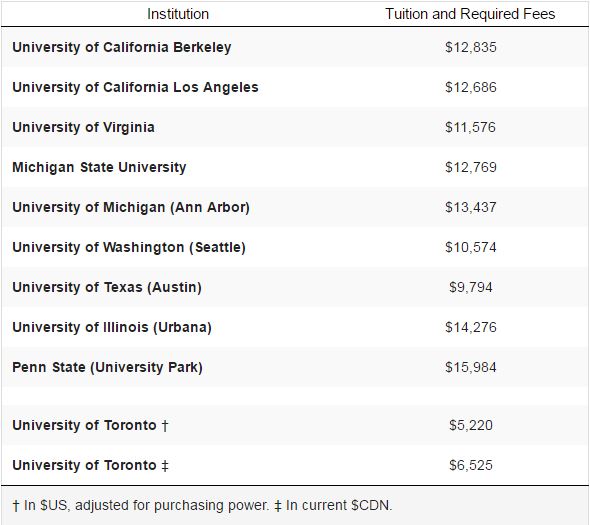 In addition, a bill was just passed in Ontario to allow tuition to be FREE (yes, actually free) for students that come from low-income families earning less than $50,000, beginning in the 2017/2018 school year.

Subsidizing tuition in low-income families is just the beginning. Canada is starting a program similar to that of the Netherlands and Sweden, in which the government pays a bit of money each month to families in need to cover basic expenses. This initiative is gaining momentum and could be passed in the next couple years to reduce the level of poverty in Canada, as explained here.

Maybe it’s the clean nature air of the Rocky Mountains, or the cottage country on lakes of Northern Ontario, but us Canadians are just way more calm! An etiquette publication states: “Canadians are more reserved and cautious than Americans. The pace of life is more sedate and tolerance of others is more important… Speak in a calm and composed manner at all times.” Even during a very rare gun shooting at Ottawa’s Parliament hill, our newscasters handle it with what the community calls a “calm, careful, and accurate” representation of events that “the US news could learn from…” Read the story.

Speaking of those gun shootings, not only when one happens are we cool, calm and collected, but we rarely have to exercise this. The majority of Canadians do not carry a gun as a result of stricter laws and regulations. In 2012, Canada had 173 homicides by gun, while the U.S. had 9,146 that year. More information on the differences are listed here. More guns, more problems.

A Toronto startup company called Hyperloop has killed the innovation game with a new way of transportation. This shuttle-like device can travel up to speeds over 500 km/h (310 mph) and could get you from Toronto to Montreal in 30 min! That’s like L.A. to San José in 30 min. Or Atlantic City to Boston in 30 min! We can expect a prototype from the Canadian company come September 2016.

I’m completely surprised Americans haven’t yet adopted the most beloved delicacy of the North. Fries are just not the same without the smothering of gravy over those crispy potatoes and succulent cheese curds. In Canada, you can get this at almost all restaurants, both fast and sit-down alike, and you bet it’s our go-to drunk food.

Don’t let the snow fool you: Canadians are coming in hot with top-notch perks. From Tim Horton’s trips that end in a ‘Please’ and ‘Thank you’, to a doctor’s check-up that ends in a smile, I couldn’t be more proud to be Canadian. This country we call the North might just be the perfect place to live. Moral of the story: you’ve gotta come visit Canada (whether Trump wins or not)!