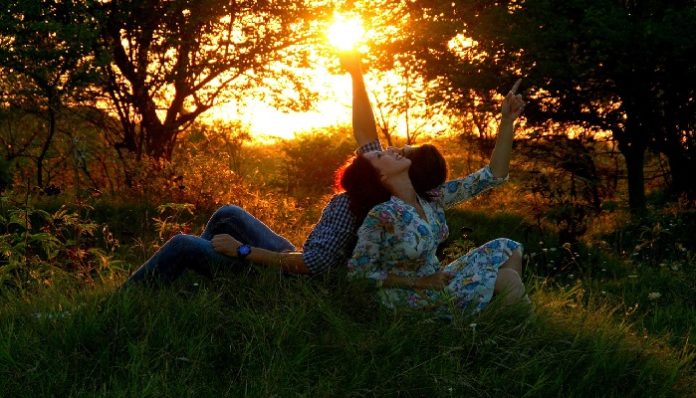 Let me just preface this by saying that I do actually have morals, I promise. But I went on vacation for a week, and apparently so did my morals. The story begins spring break of my sophomore year of college. I had planned a Habitat for Humanity trip for almost an entire year with another girl, and we were finally on our way to Florida. There were seven kids from my school and eight kids from another school staying in the same house.

Upon entering the house, I locked eyes with a guy, let’s call him Chris. I immediately thought he was cute, in a rugged kind of tall, dark, and handsome kind of way. We flirted for a few days, cuddling and watching movies all squished on the couch with our new friends, but I knew something was up. He was a total flirt, but for some reason he was holding back. Everyone could tell there was something going on between us, but for some reason Chris wasn’t making a move. Half way through the week I was totally invested in making something happen between us – I knew we were both attracted to one another, and it felt comfortable (for the first time). He didn’t make me feel awkward or self-conscious, and I could look into his eyes when we talked without feeling out-of-place. It just felt right, and it was the first time ever that something felt like that for me. Of course, once I had fully committed myself to the idea of putting myself out there, the truth came out.

He had a girlfriend at home.

I was disappointed, but it didn’t make me want him any less. I decided at that point, all morals aside, that if I couldn’t have him, I would just tease him – after all, he had waited until we were in way too deep to tell me he was otherwise engaged. So, I dressed nicely, I flirted up a storm, and, needless to say, it didn’t make me feel any better. Teasing him didn’t help me feel any less teased to begin with. Shocker. The night after he told me about his girlfriend, we watched a movie with everyone. We cuddled, per usual, and if the sexual tension wasn’t butter-knife-ready before, it now could have been cut with a shoe, or something equally as dull. I had a hard time sitting next to him without wanting to jump him. This was when I decided to pull the “is this as hard for you as it is for me?” card, figuring I was still just teasing him. His aggressive kiss on the cheek told me my teasing had gone a bit too far. We were screwed. It was all downhill from there. Later that night we decided it was time to talk, and after admitting that he wanted to kiss me, we chose not to do anything – neither of us wanted to mess up his relationship with his girlfriend. I told him I thought we made the right decision; he told me he didn’t. I knew we were in over our heads.

Fast forward 24 hours to us making out on the couch. Clearly we lost our resolve. It wasn’t very strong to begin with. Our morals, along with our decision to “just be friends” went out the window. You’re probably thinking I’m a terrible person, or that he’s a terrible person. We are both better than our actions that week, and yet we still did what we did. Do I feel bad? Without a doubt. Do I think it was the wrong thing to do? Absolutely. Do I regret it? Not even a little bit.

Before you judge me too harshly, give me a chance to explain myself.

Actually, feel free to judge me all you want, I deserve it, just don’t hold it against me, and don’t let it define your opinion of who I am as a person. If you had asked me before that vacation if I would ever do something like this, my answer would have been ‘no’. Ask me now if I’d ever do it again, my answer is still ‘no’. Here’s the thing, though, when you’re a lonely college sophomore who has never been told you’re beautiful by a boy, and has never kissed someone you actually wanted to kiss, your morality line might become a bit blurry when these options present themselves to you. Chris made me feel wanted, special, and important. He made me feel like I mattered. For someone who has never been told they’re wanted before, that feeling is intoxicating. Chris was charming and sweet, but most of all, he cared about me. I needed that. I don’t regret doing what I did because it was an experience I’ll never forget. I don’t regret it because both Chris and I can learn from it. I don’t regret it because I won’t ever forgive myself for hurting not only his girlfriend, but also the two of us. And I don’t regret it because I learned a lot about myself.

In case you’re wondering, Chris and I kept in contact after our time in Florida, and talked a lot about what to do in the following days. My friends disapproved of me talking to him, and they had a point – we couldn’t really keep the flirting to a minimum as we should have been able to. He decided to tell his girlfriend what happened. She forgave him. So while it might be easy to say, “well, I dodged that bullet” to becoming a home-wrecker, finding out her reaction really didn’t change my opinion of the event. It was still wrong what we did. I don’t know her motivation for letting Chris get away with cheating on her, but it doesn’t really make a difference. Whatever her reason, it doesn’t just let us off the hook – Chris and I have both agreed to never do this again. Hopefully we’ll both stick to our decision this time.

The events that transpired in the story above happened almost three years ago. I still think about Chris to this day, and the week we made some terrible decisions in Florida. He and I talked for about a year after our trip, maybe more. I grew too emotionally attached and I ended our pseudo-relationship (more than once). Despite the ups and downs of our friendship/more-than-friendship, I’m still so glad he was part of my life. So while I would never recommend doing what I did, if you’re like me and mess up once in a while, it’s okay. You’ll learn a lot from what you did and you’ll end up a better person for it.

Featured image via AdinaVoicu on Pixabay

If Your Partner Does These 6 Things, You’re Being Emotionally Abused 

Why You Need To Stop Letting The Voice In Your Head...