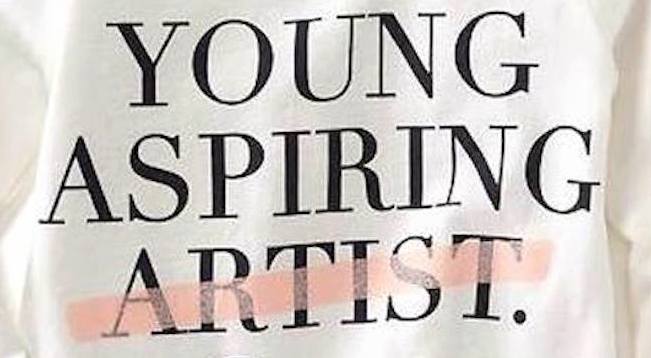 I thought we were done putting down someone else’s passion for another’s. I thought, as a society, we were past this. 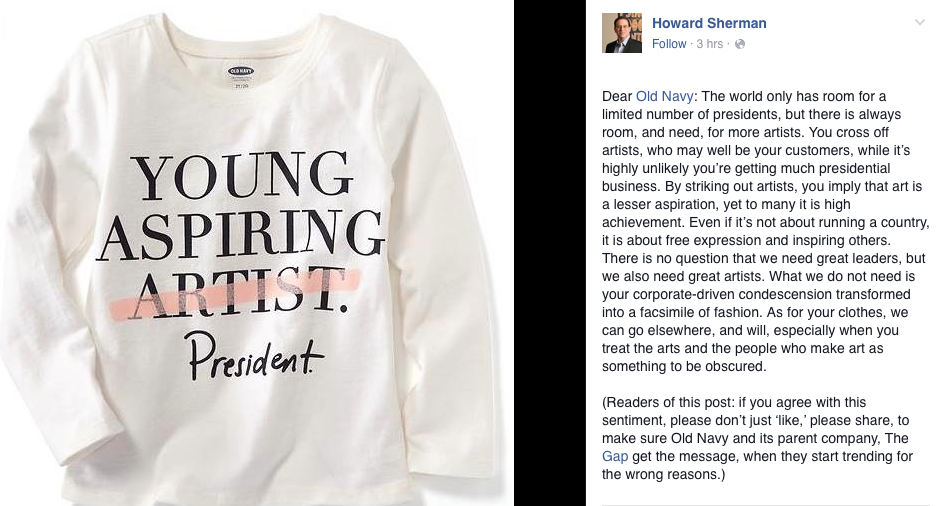 When I first saw this post about the sweatshirt on Facebook, I couldn’t really put a complete thought or opinion together. One minute, I thought nothing of it, and the next, I was just flat-out offended. Sure, I remember being younger and wanting to be the president. I also remember wanting to be a doctor, a famous actor, a teacher, a painter. As a little kid, I wanted to be so many things that I can’t even keep track of it now.

To say that the community of artists is angry would be a huge understatement. I, as an aspiring poet and writer, cannot comprehend what is so wrong with wanting to create and put beautiful things out into the world.

Being an artist is something to aspire to, not look down upon. It is something to revere in our society because, without art, we have nothing. No movies, no theater, no television, no writing, oh and also, no more funny sweatshirts. Without artists, we have no one creating new clothing designs, so where would you, Old Navy, a major clothing company, be then?

I’m not saying we should tell kids that they can’t want to be the president, or an astronaut, or a doctor. All I’m saying is that we should let kids decide what they want to be without a sweatshirt telling them that artists should be crossed off. In a world where kids are constantly being forced to grow up faster than they should have to, we should let them choose their own futures.

Not only that, while kids are growing up so fast, they are also constantly being encouraged to follow their dreams. So why are we crossing some of those dreams out?

And for those of you shaking your heads at me, arguing that being an artist isn’t practical, well I’m here to tell you that not a lot of careers are “practical” these days. Most college graduates are working in jobs that don’t have anything to do with their majors at all – that’s not just the artists.

I can understand where you are coming from, Old Navy. Having more people, not just kids, say they want to be President of the United States would be awesome; I mean, wanting to rule a whole country and change the world is amazing. But the flip side of that is having more people say they want to grow up and change the world through colors, movies, or just words is pretty fantastic too.

As we enter into 2016, I’m amazed that we are still struggling to understand what it is to be an artist. It is not just acting, or painting, or sculpting, or writing. It is creating new and inventive things to put out into the world – and that is not just what we would call ‘art.’

By crossing out ‘artist,’ Old Navy, you’ve crossed out a whole lot of careers and dreams for people to have. Next time, think more carefully.

An aspiring , I mean, artist.