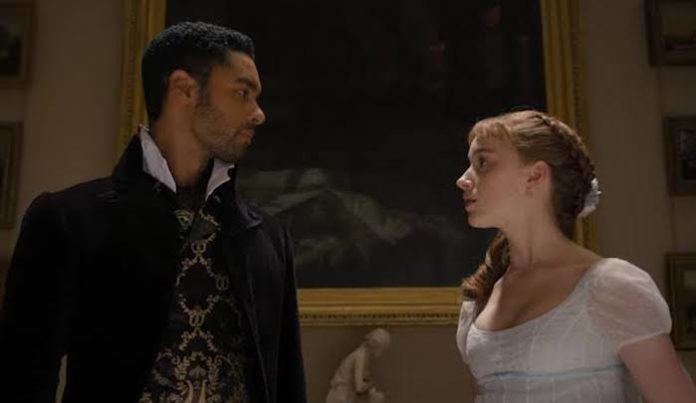 In the midst of its feather headbands and pastel ballgowns, it’s easy to miss how Bridgerton failed to address a glaring issue: rape.

Shondaland’s first collaboration with Netflix is a phenomenal commercial success. But some of the show’s darker moments may leave victims of sexual violence feeling misrepresented and undermined. Bridgerton, which is based on Julia Quinn’s book series of the same name, explores British high society in Regency-era London. It’s raunchy, witty, and playful. After its Christmas Day Netflix debut, Bridgerton quickly became one of the most popular original series on the streaming platform.

But while show ticks many boxes when it comes to diversity and female sexual desire, it misses the mark on male consent.

A scene from Quinn’s original novel that avid romance readers called out as a rape is a central part of the Netflix series The non-consensual sex scene is part of Quinn’s The Duke and I and appears in the show’s sixth episode, around the 57-minute mark.

Daphne (Phoebe Dynevor) and Simon (Rege-Jean Brown) are a couple. Daphne knows very little about sex and is unaware that her husband has secretly vowed to never father children… but adopted the good ol’ pull-out method of contraception. Simon simply told his wife that he can’t have children. During sex, Daphne changed position so Simon can’t pull out.

The result is a rape scene that is brief but disturbing.

Simon looks terrified. He cries out for Daphne to stop, but she doesn’t.

If a man forcibly straddled a woman as she asked him to stop, the outrage would be enormous. But here, Bridgerton uses a scene that’s painfully familiar to male sexual abuse survivors as an entertaining plot device. The show commits another disservice by failing to investigate Simon’s emotional reaction to the event. Instead, the next episode focuses on Daphne’s fury that Simon was capable of ejaculating but didn’t want to.

Simon’s pain and upset becomes Daphne’s as we spend the rest of the scene watching her lament to him about his alleged betrayal. She even gives a convincing speech about the difference between Simon saying that he “can’t” have children and saying that he “won’t.”

This could have been a worthwhile exploration of the importance of informed consent. But here, Daphne deprived Simon of any semblance of agreement to both sex and fatherhood. The episodes that follow see Daphne demanding that Simon win her forgiveness and give up his vow to not have children. It is a harsh reminder of the kind of manipulation and victim-blaming that sexual abuse survivors experience.

If a show is going to dabble in large issues, then it should explore them thoroughly and appropriately. Given that Quinn’s novels have been subject to criticism since their 2000 release because of this very scene, Bridgerton missed a crucial opportunity to finally give Simon the justice he deserves. In the book, Simon is too drunk to give consent when Daphne assaults him. In the show, they he’s sober and conscious.

This slight alteration implies that the creators of the show knew that the scene needed fixing. And yet they still failed to address the extent to which Daphne violated Simon. If anything, making Simon conscious and aware only feeds into the misconceptions about male rape victims by implying that he could push Daphne off if he really wanted to or that his forced compliance is somehow a sign of consent.

The scene is one big gaslighting exercise designed to make characters and viewers overlook an obvious assault.

Even more harrowing, the rape survivor here is a man of color. The media often misrepresents Black men as violent and sexually aggressive. This leaves them to suffer in silence because people scapegoat them. For the show to display Daphne, a white woman, assaulting her Black husband and then crying out that he has deceived her is a complete erasure of Black male sexual abuse.

In the 20 years since Quinn wrote her novel, we’ve discussed consent enough for Bridgerton writers to know better than to write in a rape scene. And though the show is set long before our modern conversations around sexual abuse, 21st-century shows should carefully consider the potential damage they perpetuate when they display old-timey attitudes about consent.

What You Learn About Yourself From Overcoming Tragedy

Why Google Calendar Is An Organizational Game Changer