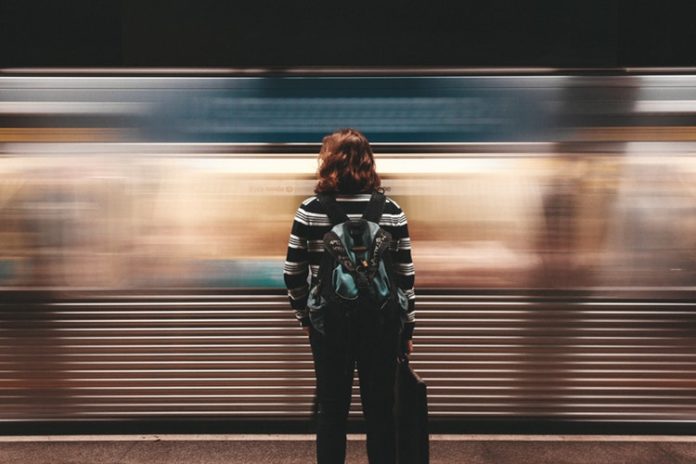 Commuters. While some of them will make you laugh, others are bound to make you question the true meaning of life. So, from seat hoggers to eaters of smelly foods, here are 10 types of people you will most likely encounter on your daily commute to work.

They’ll make the most out of their 30-minute commute to work and take everything out of their bag: laptop, notes, books, toiletries, you name it. That tight subway seat is not an obstacle for them, and as it turns out, their lap has endless storing capacity. You’ll most likely find them inquiring, “Hold this for a sec, will you?”

No matter how full a bus or a train may be, you can bet that there will be at least one overly loud talker. Either on their phone or with some other commuter they have taken hostage, they will speak loudly and they won’t care about the deeply personal or offensive topics they choose to share with the rest of the unwilling passengers on their commute.

3. The One With The Typing Sounds Enabled On Their Phone

Why, for the love of God, why would anyone want to hear those infernal clicking sounds as they type on their phone? Isn’t the cardinal social rule that immediately after you purchase a new phone, you disable those obnoxious clicking sounds? And, while we’re on this subject, your Candy Crush notifications are just as annoying. Disable all your sounds, people!

Are they really that lost in “Don’t Stop Believin’,” or do they simply not care about all the haters? One thing is for sure though: You’ll be begging for Simon Cowell to hop on at the next stop just so he can take this commuter down in the most savage way possible.

Are you worried that you’ve been missing out on the latest hits? Well, this commuter has got you covered with everything from the newest rock tunes to the cheesiest pop songs. They’re actually doing everyone a favor by showcasing their skills and talent absolutely free of charge on your daily commute.

Don’t underestimate their strength and persistence. Constantly kicking the seat in front of you takes a lot of perseverance. So, you have two options with this person: either think of the rhythmic thumping as a free back massage or get up and try to find a less annoying commuter to sit with.

As soon as they board and find a comfy spot, they will reach for their bag, only to take out one of the smelliest burritos or sloppiest sandwiches ever. Don’t despair; they will finish wolfing down their meal soon enough! The smell in the air will never be the same again, though.

8. The One Who Doesn’t Have A Clue What Personal Space Is

They will get so close to you that they could practically type your text messages for you. This type of person has obviously never been uncomfortable with pushing their body onto strangers while they ride public transport. You’ll give them a few “Get out of my space!” looks, and they will eventually get the idea and move on. But, for the rest of the day, you’ll feel like they definitely violated you.

9. The One Who Never Gives Up Their Seat

You could be on the verge of fainting or legitimately giving birth next to them, but they will under no circumstances relinquish their seat to you. Deep down, they know they are in the wrong, and everyone hates them. But, they are willing to accept the hate in exchange for a comfy seat during their commute.

With this person, it’s always “Go! Go! Go!” They simply don’t have the time to wait for you to get off or on the bus or train. They’ll kick you with their bags, they’ll stomp on your feet, and in the end, they won’t give a damn. Why? Well, wherever they’re going is certainly much more important than your destination.

Public transportation is one of the modern world’s most miraculous achievements. It is the heart and soul of every major city, and every day, it helps thousands of people get to their workplaces. Still, some people abuse their public transport privileges in the most annoying ways. So, which commuter are you?