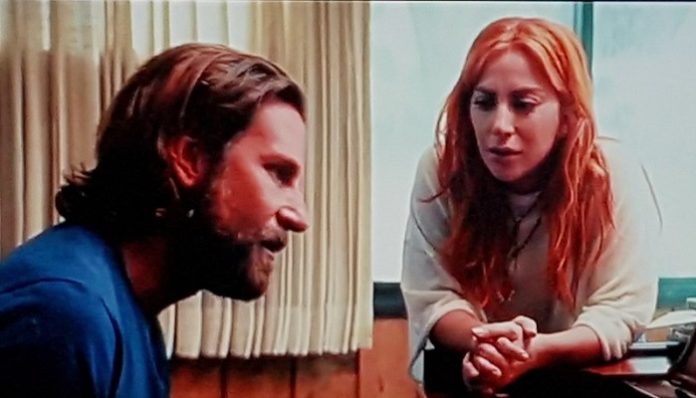 Last night, I had the pleasure of seeing A Star Is Born, which is Bradley Cooper’s directorial debut and Lady Gaga’s movie debut.  And boy, do I have to say, it was worth the hype.

The storyline is simple. It captures an epic Johnny Cash and June Carter type of romance (think of Joaquin Phoenix and Reese Witherspoon in Walk The Line) and the good, bad, and ugly sides of the music industry. It covers everything from falling in love, to issues with self-esteem, growth, addiction, believing in those you love and the struggling to stay true to yourself when the world wants you to be someone you’re not.

Overall, this movie really reminded me of La La Land because of chemistry between the leads and the passionate love that gets you giddy in your seat. (Not to mention the plot twist ending that left everyone speechless).

Like with La La Land, I became so damn emotionally invested in these characters. Cooper and Gaga had an undeniable chemistry that left me craving more from them. The anticipation of waiting to see their first kiss and laughing at their adorable flirtation gave me butterflies. I so wished I was about to kiss a pirate-looking Bradley Cooper, too. I fell in love watching them interact, and I was wholeheartedly invested in their storyline.

Cooper played Jackson Maine, a bad boy, redneck, drunk that I found oddly sexy. Gaga played Ally, a fresh-faced show stopper with a timid demure, a powerhouse voice, and a chip on her shoulder. Their personalities clicked, and they seemed so genuine and authentic. Long story short, he made her famous, while he fell off the grid. They had a bumpy road but remained young kids in love.

The sacrificial love in this film is truly heart-warming because it allows viewers to relate to the characters. You see the sacrifices each person is willing to make to support the other and to improve the other’s career. You see the power struggles they experience and the loyalty they have to one another when the world seems against them. And when things were bad, you legitimately felt your heart break for them.

While the film is set in present day, the spirit and vibe is totally based on the 70’s. While the feel of the movie confused some people, I thoroughly enjoyed the indie vibe and effortless yet thought-out screenplay and the raw performances from the cast. I think that’s what made this movie so damn believable.

Now let’s take a moment to talk about what really freaking impressed me: Lady Gaga’s performance.

Mother Monster absolutely slayed this role. Her vocals alone gave me chills every time she opened her mouth to sing. I had goosebumps for most of the movie, and she brought me to tears many times. You could tell she felt passionately about the music and her character’s portrayal. She was electrifying, convincing, and heartwarming. A star was born in her for playing this role.

Her performance equally matched Cooper’s raw, realistic performance, and they complemented each other so well. The two main stars actually wrote and produced all of the music together, and it really shows that they have a special connection to the film. The way they sang the lyrics and the way they looked at each other and interacted during each song was magical.

It made me believe in love.

You can tell Bradley Cooper gave this film his all. He wanted to produce a love story and that he did, paying homage to music-lovers and those who struggle with fame. (Plus, his singing chops are insane; I wasn’t expecting his voice to be that perfectly grungy). “A Star Is Born” is beautiful, exciting, emotional, and soul-crushing in the best way possible. It is an outstanding film about hope, love, and everything in between. You can tell Cooper put in a great deal of effort to make this movie Oscar-worthy, and I bet you it will be nominated in every potential category.

This movie is a mixture of Walk The Line in terms of the realistic side of addiction, love, and altering careers and La La Land in terms of the magical romance and attention to detail. I would highly recommend seeing “A Star Is Born” in theaters because the sound from the speakers adds to the musical performances and makes you feel like you’re really at a concert.

A Star Is Born is a beautiful emotional roller coaster I wasn’t totally expecting (I thought it was going to be a little more lighthearted than what it was at times), but I’m glad to have witnessed this timeless tale on the big screen. I encourage you to do the same because the experience this movie provides is so worth it.