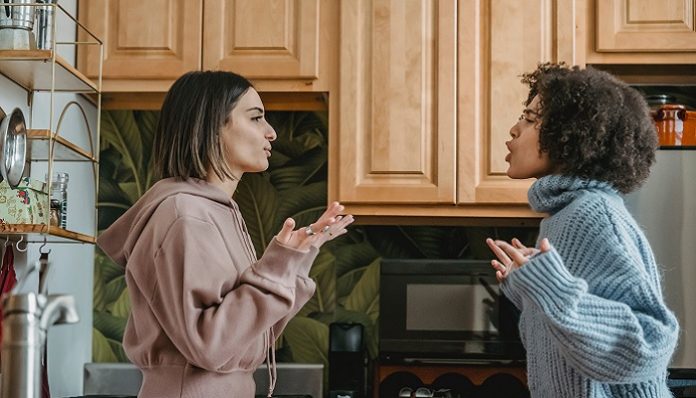 Looking for a roomie? Because of the high living costs these days, more and more millennials are choosing to live with roommates, often friends. However, what happens when your possible roommate is a stranger or acquaintance you don’t know so well? After all, living with someone requires a great deal of responsibility and commitment, even if you’re just sharing a space.

Here are eight red flags you need to watch out for to make sure your future roomie isn’t bad news.

Think of finding a roommate online like looking for Mr. or Mrs. Right. We date online, so why not suss out a roommate in a similar manner. A small thing like an ad might seem insignificant, but if they don’t take the time to perform a basic spell check, who do you think will end up doing the dishes?

2. They are sketchy on the details.

Roommates move out for a variety of reasons. However, if they’re hesitant to tell you why their former roomie is no longer there, that spells Trouble. Notice my capital T. Also, if they don’t provide photos of the space or give vague details, it’s a red flag.

We’re all a bit messy sometimes. Everyone has that chair where clothes might be strewn about. Sometimes we’re too tired to do the dishes and wait until the next day. However, when some company comes calling, most people clean their homes and tidy up. If you’re looking to rent a room in an existing space, how they treat their home speaks volumes. If they’re willing to disrespect their home, they won’t hesitate to disrespect you.

4. Their home is too clean.

If you grew up in the 90s, there’s a good chance you watched Full House and the shenanigans of the Tanner family. Patriarch of the clan, Danny Tanner, never met a vacuum he didn’t love. It’s great to want a clean space, but if they’re too fastidious about their apartment or house, they could be too uptight to compromise with.

Everyone loves a good time. But if your future roomie goes out every night like Paris Hilton or a Kardashian, that’s a crimson wave that they’d be a poor roommate. Speaking of poor, read on.

If you’re looking to rent a house or an apartment and the individual doesn’t have gainful employment, how will they pay rent? Utilities? Times can be challenging, and no one should be shamed for being in between jobs. But being chronically unemployed is a red flag.

7. Their references don’t check out.

Like a job, you need to check references for a possible roommate, especially if you don’t know them. Ask for information on past roommates and even landlords. If they don’t pony up the info or it doesn’t check out, say sayonara to them.

Maybe you have conflicting political beliefs. Or maybe you’re a nerd, and they’re a sports buff. Trust your gut, and if it tells you something is off, go with it.

I’ve lived with my share of “out there” roommates. For example, I’ve had roommates go somewhere, leaving their children behind, assuming I would watch them. I’ve had roommates whose significant others were there so often they should’ve kicked in some rent too. If I’d listened to my intuition, I could’ve avoided some strange living circumstances. With a bit of effort and maybe a background check or two (Been Verified, anyone?), you can have a great apartment and a wonderful roomie.

Why We Should Pause And Celebrate The International Day Of UN...