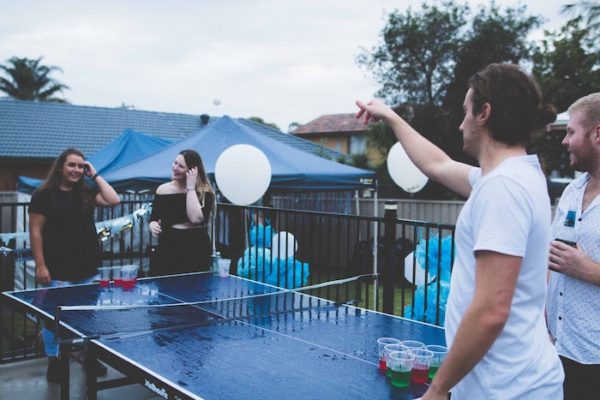 If you’re uncool like me and don’t possess a fake ID, then you’re most likely to be found at the Varsity, Knox Boxes, or even some sketchy place on Adelphi during your weekends living it up at a “house party”, (the word ‘house’ is used generously here).

Even though you aren’t subjected to the rules of a Cornerstone bouncer, as an attendee of a house party there are certain situations that everyone should avoid in order to get invited back the following weekend. Here are some party fouls that everyone should steer clear of when going to a party that’s not restricted to the intersection of College Ave and Route 1.

I know that us ladies are supposed to be equal with men and blah blah blah, but there is one thing at a party that a girl can pull off better than a guy besides a killer pair of heels. And that my dear readers is being ‘white girl wasted’. Girls can have a little too much to drink and stumble over our heels, because we always have that blush and classic drunk smiles that are cute… up to a point. However, there is nothing less sexy than seeing a guy floundering at a game of Flip Cup because he’s lost all his motor skills from one too many pulls from a bottle of cheap rum.

Rule 2: Respect the Sanctity of Alcohol

There’s no use crying over spilled milk, but spilled alcohol is a completely different story. Sadly, alcohol is a bare necessity in a UMD student’s life, and for us under the magical age of 21 we have to wait until our older brother comes for a visit to do an alcohol run to #1 Liquors or Town Hall. So if you find yourself toppling shot glasses onto the floor, it’s time you fill your SOLO cup up with water and proceed to party a tad more responsibly.

Rule 3: Clean Up Your Mess

You should basically bow down to the people who allow you to come into their home and drink your liver away. Without them you would be having a high school-like pre-game that turns into the whole game in your dorm room, which could really piss your RA off. One easy way to get off these guys’ invite list is coming to the party, f**king up their whole place, and then leaving them to deal with your drunken trail of destruction. Here’s a tip: take just one night out of your debauchery and try taking a few less shots so you can be ‘sober’ enough to get a trash bag of beer cans going.

Depending on whom you play with, there are a bajillion different rules for the classic collegiate game of Beer Pong. Before you engage in a game on your Friday night, make sure you establish all rules with your opponents. There’s nothing more annoying when you’re about to sink the winning shot and the jerk on the other end of the table just decides to yell, “Elbows,” before they have to run the Naked Mile. Instead, just set your ground rules before you create a rivalry.

I don’t know about you, but I haven’t seen any mansions in ratchet College Park that are big enough to host the whole freshmen class. That’s why when you’re invited to a house party, make sure you don’t bring your entire floor with you. We all know you’re not that cool. The people hosting the party are already putting themselves at risk, so don’t bring any more drunk people with you than the host intended. If you must bring your entire ‘posse’, ask first.

If you happen to find yourself guilty of breaking one of these rules, please do us all a favor and stop what you’re doing or party elsewhere. We know the college party scene can be intimidating and accidents happen, but in the same way you need to drink responsibly, make sure to party responsibly. If not you’ll find yourself blackballed everywhere from College Ave to Ikea, and anywhere past that, well, the crime alerts speak for themselves.

Photo by Blake Lisk on Unsplash