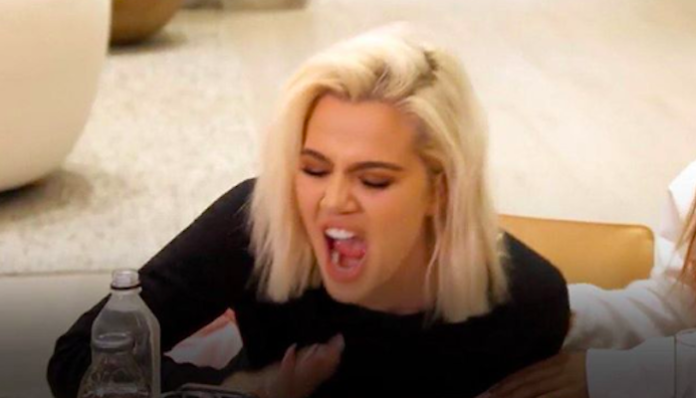 “I’m not just a TV show. Like, this is my life.” – Khloe Kardashian

It’s here. What we’ve all been waiting for since news of 2019’s biggest cheating scandal broke.

The Keeping Up With The Kardashians Season 16 supertease just dropped, and it spills the most heartbreaking tea.

“It just sucks it has to be so public,” Khloe cries in the dramatic video.

It’s unclear exactly how the entire scandal will unfold on TV, but it will be a major plot line.

Khloe is seen yelling at someone over the phone, “My family was ruined!”

Later, Khloe adds, “Tristan might love me, whatever that means. He has no respect for me whatsoever.”

Jordyn and Kylie make an appearance in the tease at a Kardashian/Jenner family event.

Kris is heard saying, “Here’s to Jordyn and Kylie.”

The youngest Jenner sibling later says, “I just hope that there’s light at the end of this tunnel, but I don’t see it right now.”

The tease circles back to Khloe after mentioning the possibility of Kanye and Kim moving their family to Chicago, and Scott and Kourtney individually talking about their relationship.

Khloe says “True’s the best thing that’s happened to me. Sometimes the world forgets just to be kind and that we’re all going through something. Maybe just be a little more understanding because it f–king sucks.”

The Good American clothing designer and Cleveland Cavaliers player sparked romance in August 2016. They made their first appearance one month later at Flo Rida’s birthday party in Miami, Florida.

Khloe spoke openly about her relationship with Tristan in Season 13 of KUWTK.

“He wants to have, like, five or six kids with me, and that’s lovely. We could start at one and then grow from there. But now, knowing I’m on birth control, it’s really scary. It’s like a really big step.”

The professional basketball player denied the allegations in a tweeted and deleting the words, “FAKE NEWS.”

The couple split shortly after the cheating scandal news broke. However, a source told ET that the pair made it clear that they would continue to co-parent their daughter True.

Four days later, a source told US Weekly that Khloe was disappointed in Tristan’s lack of interest in parenting after the split.

Tristan shut down those rumors by wearing shoes with True’s name on them during his latest NBA basketball game.

The Night I Realized There Was A Mysterious Woman Living Inside...