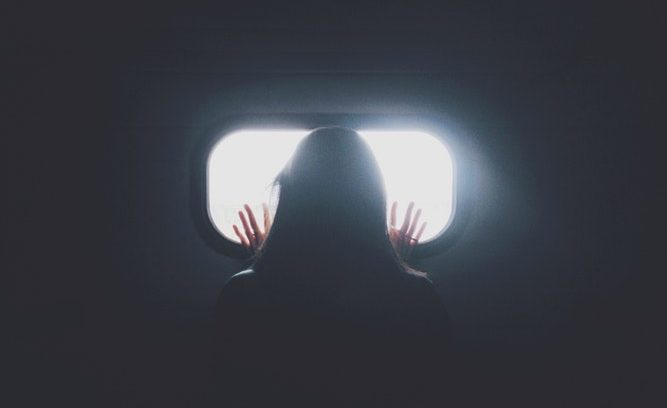 The house was quiet, but my sister and I were wide awake. My grandparents were asleep in the room across the hall. It was a familiar night.

The silence was interrupted by a quick flash of light from the old white RCA television that sat in the corner of the dresser across from the dark wooden bed. Immediately, it caught both of our attention. My younger sister, Alyssa let out a sigh; she was annoyed with me, as if it were my fault.

“Alyssa…Don’t turn the TV on, it’s too bright. I’m trying to sleep.” I whispered, tossing to the other side, my back against my sister.

“I’m not…I don’t even have the remote. You left it on top of the TV,” she fired back. We were always good at the back and forth bickering.

“Oh…right,” I said repositioning the pillow, I was restless. I hesitated for a moment, before realizing my sister was sleeping. She was a calm sleeper.

The television light flashed up again, then vanished again.

“Alyssa…stop!” I sat up and nudged my sister, who was growing angry with me.

“I didn’t do anything!” Alyssa said half asleep, I could tell she didn’t want to be bothered. But it was too late. “Just go to sle- ” interrupted by another light from the television jolting us out of our almost delicate slumber.

This light was different; it was white, bright and blinding, illuminating the entire room like a firework. The type of light I could see from the inside of my eyes, even when they’re closed. My sister and I sat up in fear, staring at the television as a woman appeared on the screen.

The mysterious woman looked like she was in her fifties. She had long luscious dark reddish brown hair with a purple head wrap with gold coins at the fringe. She had earrings down to her shoulders, matching the delicate gold coins on her headwrap. Her hands were covered with clunky jewelry and her nails were long and painted black. She was very polished-looking, for a woman who was scaring the shit out of me and my sister. The woman was wearing a white long sleeve shirt covered by a dark patterned shawl. I still remember her eyes. Her irises were milky white, piercing yet dead.

“Where are we?” Alyssa whispered to me. I looked down and felt a rush of coldness throughout my body. Looking back. I should’ve known that wasn’t good. My movement was suddenly restricted.

The mysterious gypsy women looked up right into our eyes, her mouth moving. She was saying stay safe girls, stay safe. Even looking back on that night, I don’t know what that meant. The woman kept repeating this over and over again but we couldn’t hear her. I only saw her mouth moving. Alyssa reached over and grabbed my hand for reassurance. “Why is she saying this?” I said nervously, my voice shaking “Saying what? I can’t hear anything..” Alyssa whispered back, afraid to raise her voice. Suddenly I was overwhelmed by the possibility that we were not alone in the room. I could feel my anxiety rising with every potential outcome. I didn’t know what was happening, and I still don’t. I don’t think I ever will.

“I think she’s telling us to stay safe” I whispered back. “I can’t read lips”..

“What? Why?” Alyssa fired back.  “I have no idea” I blurted out, my face tight. I could still feel the pressure in my jaw from clenching my teeth.  Alyssa noticed me move closer to the television. “Molly, don’t.”

I didn’t respond, not because I didn’t want to. But I couldn’t. I was entranced by the piercing bright white light. Alyssa reached out to try to tug my arm to pull me out of it. I  remember whipping her arm away. I couldn’t look away. This strange gypsy women had her hand over her mouth, as if she was telling me to be quiet. But I wasn’t saying anything. It was very important to her that I didn’t break my concentration.

“LEXI!! LEXI!” screamed Alyssa, scooting closer towards the foot of the bed. My poor sister, terrified. She was screaming in my face. I saw Alyssa out of the corner of my eye, but I did nothing. I knew she was there, but I couldn’t hear her. I couldn’t hear anything. I was in a fog.  Alyssa couldn’t leave me here nor could she seek help. She was terrified to step off the bed.

The gypsy woman specifically told us not to speak. If we did speak, would she kill us? While the room felt familiar, it felt so uncertain. Alyssa reached out to me, gripping so tightly she broke my skin. I vaguely remember my sister hugging me. Alyssa knew I was still alive, but I didn’t pay any attention to her because I was in such a deep gaze into the small television screen. I remember my body tingling. I remember the lights, the lack of noise and, most of all, the darkness.

The room fell back to the eerie, familiar silence. All we could hear was our own racing heartbeats. The television flashed up again, interrupting the image of the mysterious gypsy women. We sat up, alert yet confused on the bed, too scared to move. The mysterious gypsy women’s face faded into the abysses of the old RCA television. We lay awake petrified, exhausted and numb. A soft humming rang through the TV speakers and the room fell silent once again.

Photo by Mario Azzi on Unsplash.

This piece was originally published with Words Between Coasts

5 Things I Say As A Person With Mental Illness (And...

Ask Ada: What Advice Do You Have For Someone Who’s Coming...