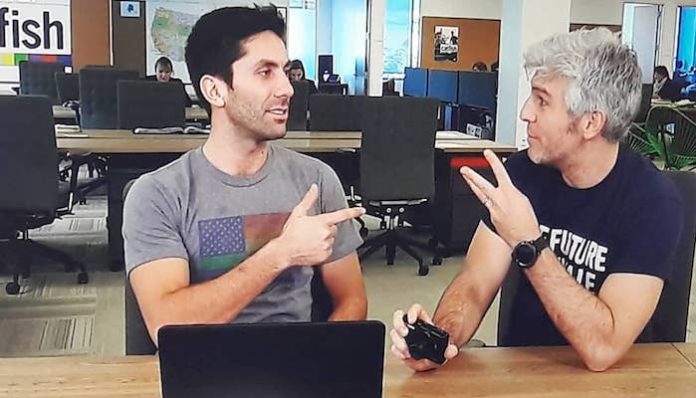 After seven seasons, seven years, Nev Schulman and Max Joseph are splitting up. No, they weren’t dating, no matter how cheeky they seemed together; but Max is moving on to better things. The salt-and-pepper haired co-host is officially leaving the TV show Catfish after Season 7 is finished airing on August 22, 2018.

In an interview with People, Max discussed his seven-year career of hosting Catfish: The TV Show while film making.

“With Catfish still going strong after 7 seasons, 115 episodes, 31 specials, it’s finally the time for me to make my exit,” Max said.  “I am also excited for everything that’s to come for myself, for Nev, for our crew and for the show. Thank you for watching, thank you for the love and for the memes.”

In this interview with People, Nev Schulman has also issued a long, heartfelt statement:

“What started as a casual friendship quickly turned into a brotherhood.”

He thanked Max for learning, “as much about the internet and society as I have about myself.” Max isn’t just a co-host, he’s a partner. His ability to listen, empathize and advise is astounding. Nobody cuts through the noise and dishes the hard truth better than he does. I’m going to miss him a lot. He’s my best friend and one of the best colleagues anyone could hope for.”

“As sad as I am though that Max is leaving the show, it brings me great joy to know that he is following his heart,” he continued. “I know that unleashing the creativity and passion that he has will benefit so many of us.

If you don’t already know about Max’s amazing work as a filmmaker, check out his website maxjoseph.com.

Good luck, my friend, and there’s really no excuse why you can’t video chat in from time to time ;).”

Even after seven years, 100+ episodes, and the show recently resuming production after a discredited sexual misconduct investigation, it’s hardly enough to say that the guys have been through a lot together. I don’t doubt that these two friends, brothers, will cross paths in the future, but it will be a hard and long good-bye for them all.

There has not been a hint as to who, if anyone, will replace the co-host yet. In the past, Nev’s wife, Laura Perlongo, has stepped in, but with their growing baby Cleo, I’m not sure she will step in full-time. There’s been many who’ve filled Max’s place like Tyler Oakley, Angel Haze, Charlamagne Tha God, Cassidy Wolf, and Alex Shaffer.

Who knows, maybe they’ll bring some old friends back on the show?!

Catch the latest episode of Catfish on MTV tonight 9PM EST. Be sure to tweet @readunwritten all about your thoughts during the commercial breaks!