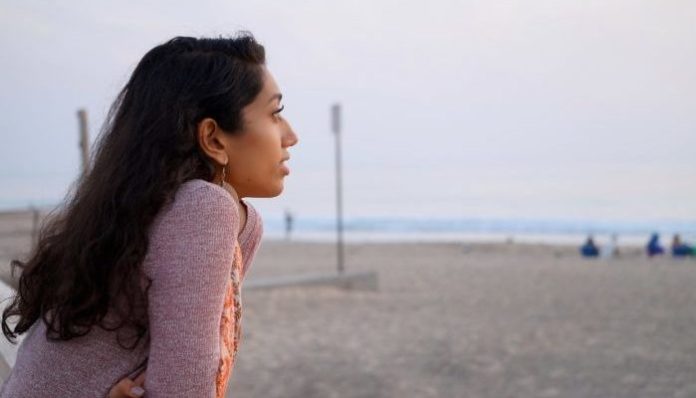 I hear the door open behind me, sensing him slide into the back seat of the car and my heart skipping a beat, as I sneak a glance through the rear-view mirror. It had been a decade since I had seen him, and his once youthful appearance seemed hardened and roughed by life. I remember when we first met, him sitting at the dinner table, and I standing in the kitchen.

I remembered how his eyes stayed glued to mine, and I, drawn to him like I had never been to anyone before.

But now, he had lost the chiseled features and muscles he had when we first met. Everything about him seemed different. But his eyes were exactly how I remembered. Dangerously charming and still made every hair on my body stand up. We make small talk throughout the drive to the lake and I feel my walls go up almost instinctively as we get out to grab lunch and enjoy the view. I kept my distance, coming off as stuck up, but I couldn’t help myself. I was trying so hard to fight the tension that still seemed to exist between us even after a decade apart.

My mind knew that he was all types of wrong for me, simply put, he was bad news. Everything about him made me want to run. He was stubborn, hard-headed, heated and arrogant. He came off as selfish, disrespectful and standoffish. Yet every time he looked at me or we happen to brush up against each other… I’d feel my face burn and a tingle run up my spine. Yet he was far from what I thought was my type. He was chubby, reminding me of an overweight hamster. And he was proud of it, showing all the more of him that there is to love. He still came off as confident and cocky, but now with much more hesitation than before.

But despite the years that had passed between us, he still made me laugh and smile just like he use to and like I hadn’t in while. He made my skin crawl, but at the same time, long for his touch and presence. He left me confused, questioning everything I thought I knew. And that was the most infuriating part. I knew what I wanted in a guy and in a relationship, or at least I thought I had. That was until I saw a different side to him. A side, that was sweet, sensitive, protective, and worn down from his parent’s broken marriage. But each time I thought a wall was coming down, he’d turn around and build a few more, making it impossible to truly get through to him.

It was as if vulnerability, was something he could never be capable of. Yet I could see his emotions written clearly across his face. I could sense when he was upset, when he was lost in thought and consumed with grief. I could pick out his different smiles and laughs. And I wanted him to share more with me. I wanted to be the one there to support him and replace his tears with smiles and laughter. But I knew I was asking for too much.

No matter how much I wanted to, I’d never be able to get that close. Not just me, but anyone. He had shut out the world and his feelings for so long, he had forgotten what it was like to have someone to share his world with. And I could relate in some ways. Sometimes our worlds are so painful and embarrassing, it seems easier to close ourselves off from everything than ever take a chance. He was so cynical about everything, and I so optimistic. We were so different, opposites really. But yet I was intrigued by him, every nerve in my body felt awakened, and all my senses heightened.

There’s the saying that opposites attract. And Disney movies like Beauty & The Beast, Cinderella, and The Little Mermaid along with most romantic comedies out there tell us the same. Though it might be true that we are intrigued and fascinated by someone who seems completely different than us, is that basis enough to build a relationship or even a future? Based on the relationships I have seen thus far, I am inclined to conclude that attraction and chemistry isn’t enough.

Compatibility, for me, seems most important. But why must I have to choose one or the other? Why haven’t I come across someone that is both? But in a world of endless possibilities, maybe there are relationships out there where opposites not only attract, but they stay together working through difficulties and overcoming obstacles side by side.

He and I are complete opposites. Opposites who share a spark and an exciting amount of chemistry. But I am too afraid to take any steps forward. Because opening up to him and letting him in, is asking for my heart to be broken again. He’ll always be that person in my life that my mind wanders to, pondering over all the possibilities and all the “what ifs”. Too afraid to take a risk and cave in. And who knows? Maybe one day I’ll find the courage to take that risk, but for now, he’ll remain an incomplete chapter in this crazy journey I call my life.

Featured image via the author

If You’re Afraid Of Change, Here’s Your Wake Up Call