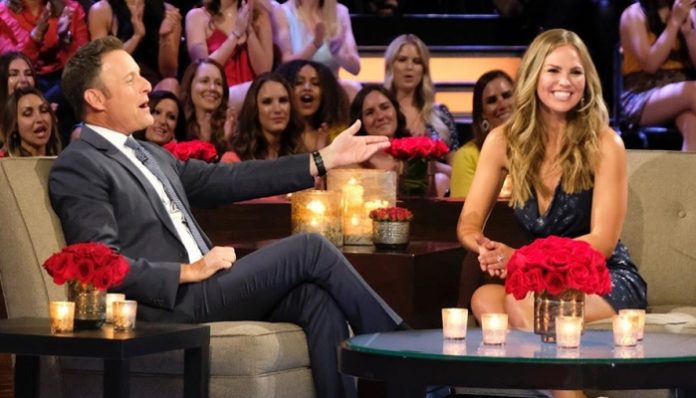 This week’s episode of The Bachelorette begins like they all do: Becca says the current travel destination is the perfect place to fall in love, makes a pun (here it’s about “rolling the dice” on love, as the group is in Las Vegas), and twirls around the city by herself, here fist pumping by a fountain. We then cut to the guys yelling Becca’s name for no apparent reason as they frolic about in their luxurious hotel suite. Blake even makes the same horrid pun as Becca did about rolling the dice on love. Soulmates confirmed.

There is no time to waste this week, as immediately a date card arrives at the hotel. Much to Jason’s (and my) disappointment, this goes to Colton, a man whom I have no grounds to dislike but I simply can’t stand. It might be because he seems so fake… almost everything out of his mouth when he talks to or about Becca sounds like a line, and I swear everything from his voice to his demeanor completely changes when he’s with her. Becca and Colton ride camels and then take a dip in an oddly placed hot tub, where he spouts a bunch of cliches. They did some other stuff in the night time too but honestly, it was really boring, just more of them making out and talking about how much fun they had. But Becca seems super into him, and she gives Colton the rose, so maybe I’m missing something here…

It’s then time for the group date, which is infinitely more interesting, as Chris absolutely begins to lose it. Last week it was Jean Blanc falling victim to the pressure cooker that is this show, and now it’s Chris’s turn.

It all begins when the men are tasked with writing songs for Becca under the guidance of Wayne Newton (singer of “Danke Shoen”). They then must perform these songs on the Vegas stage. Everyone’s lyrics and voices are truly terrible, but at least Chris has fun with it and adds some showmanship. All seems to be going well for Chris, which is how we know it’s time for his downfall.

He sits back the entire night, waiting for his time, talking about how the other men “can’t bring what [he] brings” and that he’s “ranked as one of the top frontrunners.” Ah, words of a man in love. However, when Becca gives the date rose to absolutely adorable Blake, before Chris is able to even speak with Becca that night, he loses it. He says he feels rejected, is shocked, and threatens to leave. Look, I understand how hard this situation must be, but Chris takes it a little too far. A person who suddenly threatens to leave and shows immediate disinterest at the slightest lack of attention is probably not Becca’s dream guy.

The episode sets the Chris drama aside to simmer some more as it turns its’ focus to the piece de resistance of the episode: the infamous two-on-one date. And who else would be paired up on this painfully awkward date other than the model (Jordan) and the chicken (David) who have been feuding since night one.

As with most two-on-one dates on this show, the participants are taken to an isolated area (here, in the middle of a valley in the desert) to hash out their feelings until Becca can come to a decision of whom she wants to move forward with. David has been needling Jordan all episode, always poking fun at him for being a model and trying to get him to crack. To his credit, Jordan responds pretty well, never getting too worked up by his comments. Oh my gosh, am I team Jordan? That’s a frightening realization.

The moment Becca and David sit down for some one-on-one time, David tells Becca that Jordan always talks about the models he wants to date and says that he feels like he would be settling for Becca. This, understandably, upsets Becca because no one ever wants to here they’re not a first choice, but rather a choice someone would settle for. Becca then confronts Jordan about these comments, who denies them vehemently. He even begins to open up to Becca, mentioning his mother’s mental illnesses and that he grew up poor and had to work for everything that he has. It’s a new side to Jordan, however it’s clear he’s uncomfortable with showing this side, as he speaks quickly and has trouble looking Becca in the eyes as he tells her this.

The three then talk together, with Becca telling the men that they are acting like they are in the sixth grade and being petty (she’s right, but I shamelessly live for it). Jordan and David have a final confrontation in which Jordan tells David, “You’re so nasally,” satisfying viewers everywhere. In the end, it’s clear that Jordan likely didn’t say the comment about “settling” but instead made some jokes that rubbed David the wrong way. David seems to be projecting his biased perception of Jordan onto him and believing it’s reality, which isn’t totally fair. In the end, Becca sends David home, but doesn’t give the rose to Jordan just yet.

Jordan is, of course, a humble winner.

Jordan: Why did the chicken cross the road? To get buried in the f***ing desert. Ran his beak too much and got his head cut off.

In the night portion, Becca and Jordan sit down to dinner. They spend a lot of time talking about Jordan’s modeling, his skincare routine, and pondering the accuracy of Zoolander. They share one kiss in which Becca can’t stop laughing long enough to make it through. It’s clear they have a friendship, but no real chemistry, and so Becca makes the choice not to give Jordan the date rose, and he is sent home. In the limo ride, Jordan lists all his great qualities, wondering what it could possibly be that Becca didn’t like.

Then it’s cocktail party time, and the Chris drama that’s been simmering finally boils over. (I hate myself for that pun). At some point on the two-on-one date, Becca learned that Chris contemplated going home after the group date. She immediatley asks him to have a conversation with her, which does not go great. He tells Becca he felt like she was disinterested, while she claims he didn’t take the initiative to come and find her. Chris reassures her he feels strongly for her and wants to stay. Becca says she still needs to think, and seems a bit miffed by the situation. Chris is distraught, beating himself up over the way things went.

Then it’s time for the Grand Standoff between Chris and Wills. Becca and Wills are deeply entangled in flirty banter as Chris approaches, desperate for a second chance. He asks Becca if he can talk to her, and she tells him that she and Wills have only just sat down (AKA, no). And almost as if she said nothing at all, Chris turns to Wills and asks for a few minutes of time as if it’s his to give and not Becca’s. Wills says Chris can have two minutes (after making sure it’s okay with Becca), and leaves for a moment so that Chris can plead his case. After the allotted time passes, Wills returns. However, Chris says he’s not done talking and won’t leave. It’s all very awkward as the two men simply stare at each other, neither willing to back down. Eventually, Becca tells Chris she’ll find him later, and she and Wills resume their earlier conversation.

Becca and Chris speak again, but don’t really get anywhere, and so when the rose ceremony rolls around, it’s unclear if he’ll stay or go.

Why Getting Back With My Ex Was The Best Decision I...

How To Get Yourself Back When You Feel Hopeless