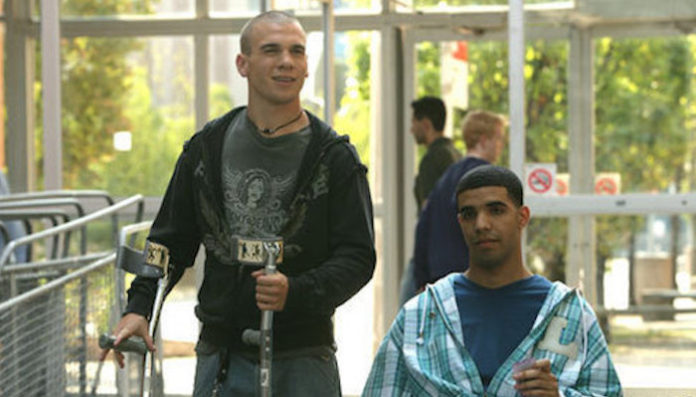 I started watching Degrassi: The Next Generation on the N network back in 2008 when I had entered the 6th grade where I began to struggle with accepting my cerebral palsy. While going through puberty and dealing with everything else that a typical teenage girl goes through, but just on wheels. I often felt like I was the outcast of my grade being the only girl in my special education’s class and being the only student that cared about her grades. I found it very difficult to be a part of that crew.

When everybody’s talking about Friday Night Smackdown, and you feel like you have no choice but to watch it because that’s how you’re going to fit in although you know you could care less about the undertaker.

I remember being so desperate to find something or someone that I could relate to.  It wasn’t until I came across Degrassi to where I finally felt like someone understood me and my struggles. It helped me see I wasn’t alone in my battles with accepting the fact that I would be wheelchair-bound for the rest of my life. When I saw Jimmy Brooks for the first time sitting in his wheelchair rolling on my TV, my life changed.

I remember looking at the TV and immediately falling in love with Jimmy Brooks’s character and the struggles he faced as a paraplegic teenager. He went from the star basketball player to now being a disabled teen and learning to accept it and how to adjust to a new life and doing the things he loved.

As I’ve for once had to learn how to accept cerebral palsy, I can relate to Jimmy Brooks struggles and challenges he had as a person in society. Especially being labeled for your disabilities instead of your abilities is a challenging thing.

I remember being a teen and having to deal with bullying and I would eat lunch alone sometimes. I would cry and ask myself why was I made this way but then go home to watch Degrassi and remember that everything will be okay.

As soon as I saw Jimmy, I remembered that I was not alone in my situation dealing with society and my disability.

So, I thank the writers and creators of Degrassi for bringing awareness to the disability world and the struggles that we faced as humans on a day to basics.

I believe that Degrassi started a new beginning of spearing awareness for people with disabilities. If it weren’t for Degrassi who knows how I would have coped with bullying in middle school. I’d probably have forever felt as if  I was alone in the world with no one that understood me at that time.

I’m thankful that they are more Television shows that bring awareness to disabilities like Breaking bad and ABC’S Speechless and A&E Born This Way to help society have insight on disability awareness to help. These types of shows are helping show people what having a disability is like, why just because we do things differently-it doesn’t mean we’re any less human or normal.

I hope that the younger generation of people with disabilities copes with their disabilities better than before. I hope that they find shows or people or characters to connect to help make them feel better and to remind them they’re not alone. Just like Degrassi helped me cope with my Cerebral Palsy.

Featured image via Degrassi: The Next Generation

Why It Takes Times To Learn How To Put Yourself First