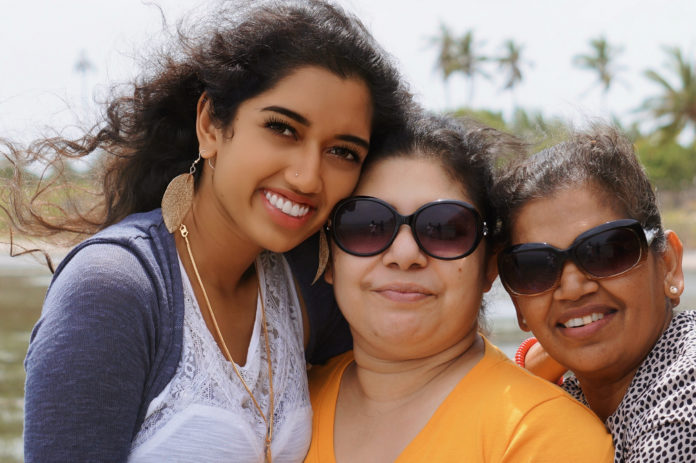 “When you look at you mother, you are looking at the purest love you will ever know.” ~ Charley Benetto

I watched intently as my mother circled her ancestral home, her chest rising and falling with each breath she took. Despite the large sunglasses that adorned her face, I knew that my mother was fighting hard to keep her walls up. She was a strong woman who had immigrated to the states alone, given birth and raised her daughter as a single mother for almost three years, and worked hard every day to give her children the future she could only dream of having. My mom looked a lot like I do now. Except she had these deep-set dimples that everyone looked on enviously. From her, I inherited my large doe eyes and with it the innocence that lied within them.

At 18, my mother left her nest to travel to India to pursue a degree in oil paints. Whenever her thoughts went back to her time there, a smile would play across her lips. When her older brothers could no longer afford to send her money for her school fees, she came back home. My grandparents struggled with raising 6 kids on a small single income, but they did their best. My mother loved her parents dearly, more than all her other siblings did, and as I watched her place her hand on the concrete wall of her family house, I felt the pain that was tearing through her heart.

Stepping out of the air-conditioned car, I walked over to my mother. And for the first time, I noticed how frail she had become. The map of wrinkles on her face told the story of a woman who had overcome a great deal. Her forehead hid worries of the past and present, and the folds by her eyes captured by the sun’s rays revealed the innocence that lied within them. My mother had always been beautiful, and despite her age, she had always managed to look years younger.

I walked on the gravel that my mom had played in as a child, and took in the trees that my mom had eaten mangoes and other delicious tropical fruits growing up. And when I lightly touched her shoulder, I felt the weight of her parent’s passing. She turned around and held onto me tightly. My mother sobbed as I had never seen her cry before. I held on even tighter, my heart felt as it was tearing from the inside, and at that moment I wanted nothing other than to take all her pain away. Because the tears, which fell on her face that day, weren’t like those I had seen before. They were tears that came from a person who had lost all hope, who felt completely alone in this vast world. In her sobbing, I could hear the sound of a heart breaking. My mother spoke no words, but I knew what it was saying. As I held on tighter and tighter, I whispered, “Amma, you are not alone. You never will be. I promise.”  I felt her squeeze me, and I held her just like that.

Growing up, I always heard relatives speak of me as my mother’s shadow, and throughout the years we’ve had our share of both good and bad moments, but amidst everything that has happened, she has been an incredible figure of inspiration, hope, and support. The sacrifices my mother has made are countless, but the moments of appreciation from us have been far too few. A mother gives and gives, never asking for anything in return. And that kind of unconditional love can only come from a mother.

My mom gave me my wings, and for that, not enough flowers, hugs, kisses, or words, will never suffice to express how grateful I am towards her.

In this life, I have been blessed with not just one great mother but with two. And it is from my second mother that I’ve learned much more than I ever thought possible. Tucked away in a small corner I found my mom from a previous lifetime. I say that because as soon as I met her, the precious word “Amme” escaped my lips without my knowledge. I instantly felt a connection like no other, and despite not sharing her womb she knew the beats of my heart, and voices that clouded my head. She knew the silent words my eyes spoke, and the expressions of my face that very few could read. She had kissed my soul and filled all the places in me that my mother could not.

Her sons worship the ground which she walks on, telling me of the tale where their mother saw a young boy with no legs, making his way down the street, in immense pain from having to drag himself along and from the burning heat. His clothes stained by the dirt and arms tired from the journey. My Amme watched as people whispered behind his back, staring and pointing at his disability. She stopped her car, and went over to the young boy, and smiled at him. She asked him where he was headed and he replied that his mother was ill and in need of medicine. Afterward, she picked him up and carried him into her car. As soon as she placed him on the seats, he moved down to the floor. Curiously as to why she asked. He replied, “I do not wish to dirty your seats Miss.” My Amme refers to every child as her son or daughter. And so she said, “My son, there is nothing dirty about you.” She placed him again on the seat. My Amme then dropped him at his home after getting his mother some medication and gave him whatever money she had on her at the time. Her only regret, if only she could have given more.

I come from a culture that views a woman’s place is in her home. But my mothers both have gone against those cultural norms and showed me that a woman’s place is wherever she believes it to be, despite what society may say. Their frames might be tiny, but within my mothers reside extraordinary strength, dedication, and wonderful, generous hearts. Both have held my hand and showed me the power that lies in helping others. Their hearts of gold, which they passed onto me, carry me through each day, inspiring me to live my life through a lens of unconditional compassion and love.  My mothers are one of the most selfless people in this world, and despite those that have walked all over them, they haven’t lost that virtue.

There are so many extraordinary women around us, those whom we call our mothers, grandmothers, sisters, aunts, etc. and each of them possess the unique power of teaching us something about life. From both of my mothers, I have learned that a woman is this world’s greatest gift. A woman’s strength comes from within, despite what society may say.  Growing up, we are taught that it is weak to shed tears. But they are wrong. One’s tears can never be powerless, especially if those tears lead us to a sense of tranquility and realizations. The world is a cruel and tough place, but it is also beautiful and wonderful.

Because, wherever there is beauty, a mother’s love is there.

The woman I am today, has been shaped by women like my mother, my amme, and my grandmother. My strength has come from listening to their stories of struggle, defeat, and triumph. And I am so lucky, so blessed, and so thankful to have these women in my life. When I look at each of them, I realize the true meaning of the phrase, “When you look at a mother, you are looking at the purest love you will ever know.” Their love is selfless, forgiving, understanding, and above all, unparalleled.