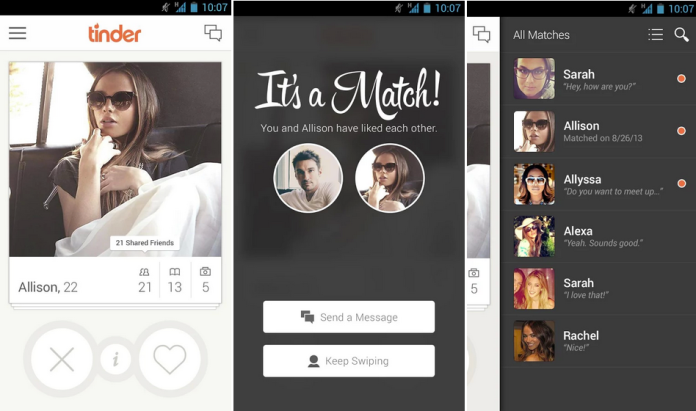 A couple of weeks ago, I was having coffee with a good friend mine. After all our small talk was over, the conversation had steered towards dating. He goes on about this girl he’d been seeing for a few weeks.

“Where do you think?”

Stupid question, really. Tinder has become the primary avenue in which most of us meet new people. I’ll be honest, I met three great guys that I saw true potential with from Tinder over the course of this year. How long did each of those encounters last? In chronological order: three months, one month, two weeks…can you see a pattern here?

The thing about Tinder is you have the opportunity to ‘get-to-know’ the person you’re talking to before you’ve actually met them. This can be great, because by the time you actually get around to the nerve-wracking meet up, some of the weight that first dates bring just disappears and you feel you have known them for ages. Subsequently, things have a tendency to escalate quite quickly and a week down the line, it’s crucial to remind yourself that you’ve only known this individual for seven days, not seven months.

I first discovered Tinder in April last year and wasn’t really sure what the hype was, nor did I understand why Karheem, 24, from London was so keen to meet up for drinks after exchanging about five texts in total with me. Unmatch. Sorry, Karheem. If you’re reading this now, know that I felt bad for like three days. Okay, maybe two.

With the first guy I found the courage to meet up with from Tinder, I made the fatal error of not taking into account that guys who only have selfies on their profile, and not full body shots, are typically (though one wouldn’t assume right away) vertically impaired. Call me shallow, but there needs to be a physical attraction for a relationship to flourish, and my preference is in taller men. When I met this guy, and discovered he was only three inches taller than me, my heart sunk. We didn’t and weren’t going to work out.

Aside from the people I’ve taken seriously on Tinder, there’s also been some amusing and not-so-serious exchanges. So many intellectually stimulating men on this thing, that’s for sure. Check out one of best conversations: 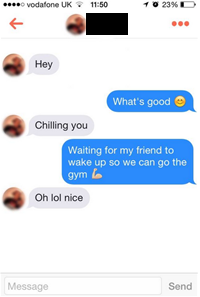 Thrilling, right? I didn’t reply. A week later, he sent me another “Hey.” Needless to say that his persistence wasn’t enough to lure me back into that snore fest. It wasn’t just his monotonous, monosyllabic replies that put me off, but being an English major, if I text someone who doesn’t know how to spell or use simple punctuation in their sentences, it irritates the crap out of me!

As I’m sure most of you are aware, Tinder doesn’t always have profiles for people. I have come across several profiles for “services” and scam artists. Like my good friend here:

That’s just one of probably many, many instances! I myself have been accused of being a “scam” because I only had one profile picture. However, this was purposeful as I wanted to create an element of mystery (lame, I know). Unfortunately, this decision backfired on me a couple of times with many noble bachelors making assumptions and labelling me “ a fake,” “ a catfish,” and my all-time favorite “a webcam girl.” Thanks for the prejudice and discrimination, guys, it wasn’t like I had the link to my Instagram in my Tinder bio where you would find out that I am exactly who I say I am.

Of course, not everyone on Tinder is bad and ugly. There are some happy endings that come out it too, but they’re about as rare as a truffle mushroom. Pessimism and sass aside, I know of some couples that met through the app and have managed to establish official relationship status. There is hope for those of us still perched on the edge of the relationship harbour dabbling our lines into the sea of fish, but keep your guards up ladies, there’s inevitably going to be some sharks.