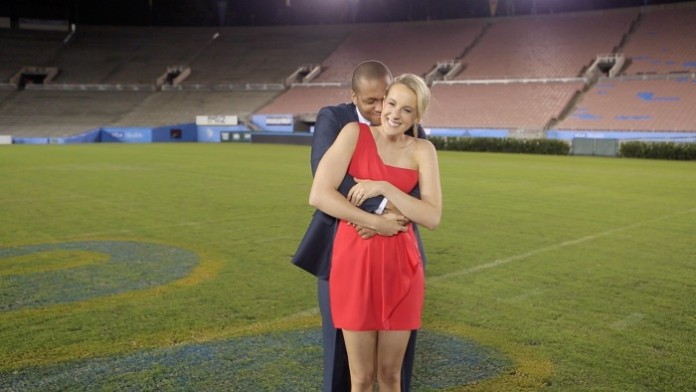 It’s not abnormal for me to spend the larger portion of my day scoffing at the articles and videos that have gone viral on Facebook; Sometimes it’s a riveting ‘What kind of sandwich are you?’ quiz; Sometimes it’s a (surprisingly believable) article about how the death of a recent celebrity was all a hoax; Sometimes it’s a video of a guy coming home to his dog from the war -it all varies. But yesterday it was ‘The Perfect Proposal,’ and girls went nuts.

I honestly don’t even know where to start… There is just so much wrong with this proposal video.

Um, do they even know each other?

“After numerous Skype dates, phone calls, and 350,000 sky miles, Levy decided it was time to ask Tiffany to be his wife.”

I mean, do I even need to waste the energy explaining how ridiculous this sounds? Here are two young people who have never even lived in the same city, let alone same apartment and Levy thinks it’s time to get married. Where’s your logic, Levy? This is a terrible idea. He doesn’t even know what her breathe smells like, she doesn’t even know if he snores! This is going to be a disaster, and I hope they make a divorce video.

I hated him as soon as I saw him. Everything from his tucked-in shirt to his underbite, it’s all disgusting.

Why is she dressed like a tween? Why is she so awkward and uncomfortable?

Wait, I’ll answer that. She’s experiencing the worst proposal ever, to a complete stranger. Also, why can’t this bitch walk? She looks like a drunk baby giraffe

Let me get this straight…she knew the entire day that she was going to be getting proposed to? This raises my blood pressure and now I need a snack.

A proposal should not have the same vibe as a Sweet 16 birthday party. This is so wrong and so tacky.

The only good part about this video so far is that he said “mimosas” …but then quickly ruined by the worst part when he says the  proposal limo is “stocked with tissues.”

At this point, I just want to punt this guy in the shin.

Hello guys, when it comes to your proposal, please spend most cents on the diamond. I’m assuming it was him who paid for all of her friends to fly out, that’s adding up to a couple grand in my head. Not to mention the several mani-pedis and lunch bill. While some girls might like this idea, all this is doing is adding dollar signs in my head to how much bigger her diamond could have been.

Her friends don’t seem like the ‘salad and water’ kind of gals either.

This is fucking weird. This should be the best friends duty. It’s her job to figure out a way to make sure her friend has a nice manicure before her left hand makes its debut on Instagram.

Guys, just get a dope ring. Most girls I know always have their nails painted anyway. I mean, if you don’t have a gel mani on right now, then honestly what are you doing with your life?

Oh, I didn’t know you got to PICK OUT what you were going to wear the night you got proposed to BECAUSE I THOUGHT IT WAS SUPPOSED TO BE A SURPRISE.

(I could write a whole other article on her dress choice.)

And why are half of them in athletic clothes and the other half in suits? Now I’m annoyed at how much it probably cost him to hire the local high schools Mathlete team to play as his friends for the day.

These are all expenses that could be being added to the diamond.

10. He Proposed on a Football Field.

…HE PROPOSED ON A FOOTBALL FIELD.

Everything he said was all things I’ve heard before. I couldn’t find an sliver of passion between them, it was like a bad Drew Barrymore movie. I don’t even think he knows her favorite color. I’m honestly not quite sure she knows his name!

Also, his grand plan of having both their parents there is a disgusting way for them to meet for the first time. Her poor father.

Just because I’m on a hating roll, the ring looks like a stale Cinnabon…and that’s all this video did for me, was make me want to go get a Cinnabon.

Getting proposed to is supposed to be one of the most intimate and magical moments in a girls entire life. This video is actually my nightmare proposal, a big part of it being that it’s on video and available for a girl to write a critical blog about. I don’t want a random camera crew around when I’m getting a pedicure (mainly because I’m ticklish) but definitely not when I’m being proposed to on a stinky football field. It was clearly all about him and what he wanted. I really only have one requirement for my proposal– it’s that having hate-YouTube-comments on the most important moment of my life to not be an option. The whole thing was awful except for that she was able to get a little tipsy along the way.

Understanding why no one would want to propose to me,