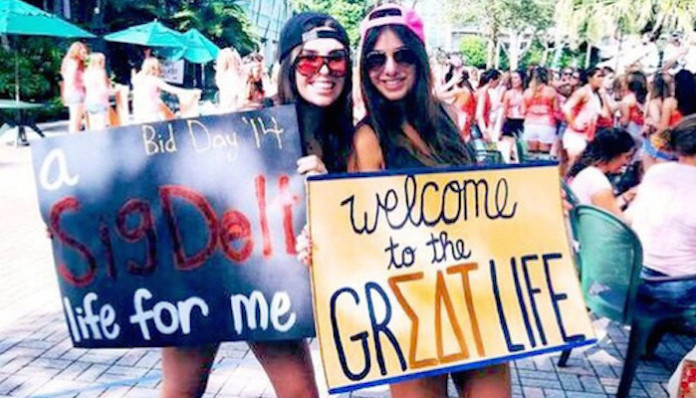 I love sororities but I’m not in one. Weird, I know. I rushed my freshman year, and it was honestly a great experience. I loved my Pi Chi group and I met a lot of girls that I probably wouldn’t have hung out with otherwise.

But Greek life just wasn’t for me. So, I dropped out of rush. It was a lot sadder than I expected, mainly because I had to tell everyone. I told my friend Kathleen first, then my Pi Chi group leader Natalia. She understood and supported my decision as long as she knew it was mine and that I hadn’t been influenced by any outside parties. She then took me to see the head of Greek life where I signed a paper and just like that I was done.

As I talked to more and more of my friends I realized the things I was going to miss out on. I wasn’t going to have a big or a little. I wasn’t going to get letters to wear around campus or cute T-shirts with nifty little sayings on them. I won’t get the post-grad networking that everyone always talked about.

But then I realized:

I already have a little sister who is way better than any “little” I could have gotten, simply because she’s stuck with me for life (sorry Jess). The letters don’t really mean anything. My friend are still my friends even when they are wearing their letters, plus I don’t have to dress up on pin attire days. I can get networking by myself the old-fashioned way with the jobs I now have time to do instead of going to chapter meetings.

If there’s one thing I need to be clear about it’s this; in your life, you’ll do things greater than joining a sorority in college. Heck, you’re going to do things better than even going to college. You could do something as world-impacting as find the solution that ends global warming. You could be something as classically famous as the next Vogue editor or end up being a freaking pop star bigger than Miley Cyrus.

I realize not everyone got the chance to make the choice that I did by dropping out. Maybe you simple didn’t get a bid on bid day or got rejected by the sorority you had your heart set on. And it’s devastating and I’m so sorry you had to go through something like that but you need to know that just because a group of college girls didn’t let you into their sisterhood doesn’t mean your value decreases in any way. If anything it just opens you up for new opportunities to do what you love. Whether that’s starting a new club at your school, playing a club sport maybe, or even having more spare time to write for a super cool website.

Sororities are great, but they aren’t everything. If you get the bid you want, that’s great and if it’s what you feel is best for you then by all means, accept it. If you don’t, then don’t accept a bid you don’t want just so that you can be in a sorority. It’s not worth it. Sororities are just like boys; don’t settle for less just because you think you need one in your life.